The FAA Continues to Wage War on Drone Users 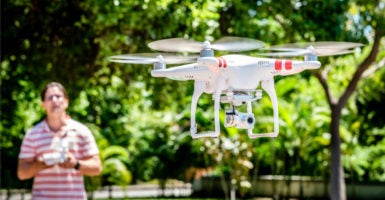 Last week, new federal rules for commercial drone operators took effect. For the first time, the Federal Aviation Administration is not demanding to review and approve of every single commercial use of drones in the country.

This approval-by-waiver process took months, and needlessly delayed commercial development and deployment of drone technology. But don’t expect the FAA’s new Part 107 regulations, which set strict limits on the type of commercial activity drone operators can engage in, to be much better.

The FAA persists in its largely unsupported claim that small drones are a serious threat to the national airspace, and dumped hundreds of pages of new regulations on the nascent commercial drone industry. Operators must pass an FAA knowledge test, which costs $150 and must be renewed every two years. They must also undergo vetting by the Transportation Security Administration.

Once approved, these operators cannot fly drones that weigh more than 55 pounds, fly higher than 400 feet in altitude, fly at night or over populated areas, or fly directly over people not involved in the drone flight.

Complying with these restrictions means forgoing the most beneficial and advanced uses for drones.

Complying with these restrictions means forgoing the most beneficial and advanced uses for drones, like package delivery, infrastructure inspection, and disaster relief. It also undermines efforts to find technological solutions to valid safety concerns through trial and error and consumer feedback.

The FAA would leave American consumers, and the American economy, with only the most basic drone technologies and services. U.S. companies, meanwhile, are expected to graciously accept these regulatory restrictions.

Instead, companies are taking their talents and investments overseas. Last month, Amazon inked a deal with the British government to permit package delivery testing. And one company, Zipline, is delivering medical supplies to remote areas in Rwanda using drones that can fly up to 75 miles in a single trip. That service could save countless lives.

Are there not remote locales in the U.S. that could benefit from speedy medical deliveries? Are there not, right now, populations devastated by natural disasters that could gain from drone delivery of relief aid?

In recent weeks, even the FAA has been forced to acknowledge that drone technological development and deployment in the United States has been slow. It has even admitted that its own regulatory response could not keep pace with industry. Yet, bizarrely, it has doubled down on its current approach to drones.

At a White House summit last month, convened in large part due to industry dissatisfaction with the government’s hyper-cautious regulatory approach, regulators and officials laid out a slow piecemeal strategy that lets the FAA, not the private sector, determine the pace of innovation in the industry. First, Part 107 regulations. Then, regulations enabling flights over people. Beyond-line-of-site rules will come sometime later.

The ability to grant or deny waivers via a totally opaque process invites cronyism and favoritism.

In the meantime, the FAA wants Zipline and companies like it to bring their technology back to the U.S.—provided they apply for, and wait to receive, a waiver to all the Part 107 restrictions. It is precisely this burdensome, bureaucratic process that drives these companies overseas in the first place.

This is untenable. The ability to grant or deny waivers via a totally opaque process invites cronyism and favoritism.

Companies will not invest the capital and resources necessary to build out expensive, complex systems that can only be operated with the blessing of a government bureaucrat. Big firms will, for the foreseeable future, go overseas; smaller ones will never get off the ground.

And now, it seems, these burdensome new rules and restrictions will apply not only to businesses, but to a great many hobbyists as well.

For years, commercial and recreational drone operators have been treated quite differently.

Commercial flights were banned by the FAA without a Section 333 waiver. But hobbyists could fly freely, until December 2015 when the FAA contorted the text of the law and its own regulations to force hobby drone fliers to register themselves as drone owners. Hobbyists must now comply with a host of flight restrictions or face steep civil and criminal penalties.

In 2012, Congress tried to prevent nonsense like this by creating a statutory carve-out for hobby fliers that would protect recreational fliers from new government regulation.

That didn’t stop the FAA in December, and now the agency is going further still. It argues that any hobbyist who is not a member of a “nationwide community-based organization” is not protected by that carve-out, and must therefore comply with the new Part 107 restrictions.

Hobbyists now face a choice: join a hobby group, or submit to the FAA’s commercial regulations. But, just what is a “nationwide community-based organization”? When asked that question, the FAA responded that it “does not intend to maintain a list of organizations that would qualify as a ‘community-based’ organization” and points to only one example, the Academy of Model Aeronautics.

Since the agency refuses to define the term “community-based organization,” fliers could join a group in good faith only to see FAA officials dismiss the validity of that group, exposing them to civil fines for violating FAA regulations of $1,100 per violation.

The FAA has demonstrated no compunction about targeting recreational drone operators for enforcement actions that run up tens of thousands of dollars in civil penalties for alleged violations of ambiguous rules.

The goal, though not unique to the enforcement of aviation rules, seems to be to make an example out of a few unlucky people so that others will fall in line. In that kind of environment, the only rational choice for many hobbyists will be to comply with the FAA’s new Part 107 rules even though Congress specifically attempted to exempt hobbyists from FAA regulation.

There is nothing, it seems, not even the will of Congress, to deter the FAA from regulating people flying toys around their own backyards.

Taken together, the clamping down on commercial activity, the piecemeal regulatory approach that permits certain types of innovation only at a pace regulators approve of, and the arbitrary regulation of hobby fliers evinces a design by FAA officials to control the entire drone industry and all those who take part in it in the United States.

The FAA has gone hog-wild, and it is time for Congress to rein it in.