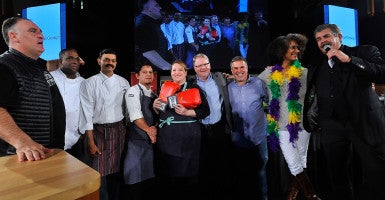 D.C. Central Kitchen, a meal provider and the creator of one of Washington, D.C.’s most successful job training programs, raised over $550,000 last week to put toward its annual operating budget.

The nonprofit earns 60 percent of its $13-million annual budget through social enterprises—including a catering business and a school lunch program—throughout the District.

“It was a little nerve-racking, but we had a good time,” BRABO Chef de Cuisine Harper McClure, who competed in a live cooking competition at the event against winner Chef Amy Brandwein, told The Daily Signal.

McClure has previously cooked in demo classes for students in D.C. Central Kitchen’s culinary job training program, a 14-week-long course offered and funded by the Kitchen that helps men and women with histories of homelessness, incarceration, poverty, or job frustration find employment in the culinary industry. The program has a 93-percent job placement rate.

“I feel great being a part of [the Capital Food Fight],” McClure added. “The amount of money they raise, and where it goes, it’s astronomical. To be able to help out and make it happen is cool.”

Celebrity chef José Andres, who serves on the D.C. Central Kitchen Board of Directors, along with TV personality Carla Hall, hosted the event. Hall, who hosts the food-themed talk show The Chew, was formerly a contestant on “Top Chef.”

“D.C. Central Kitchen, I think, really gives a lot of support to the education [of its culinary job training program graduates],” said Theary So, executive chef of Hank’s Oyster Bar in Washington’s Dupont Circle. “We want more graduates coming out of there so that we can boost the economy. Restaurants are always opening up and we need more people.”

Hank’s Oyster Bar is one of many restaurants throughout the D.C. area that donates unused food to D.C. Central Kitchen, which provides meals to food banks throughout the city.

Anthony McClure, who will graduate from the program on Jan. 8 and hopes to be employed by one of the hotels D.C. Central Kitchen partners with, made a mandarin curry chicken dish.

“This is a great experience for us,” McClure said. “D.C. Central Kitchen has made a very big impact on my life. I just love it here.”

“I know I graduate on the eighth of January, but if I could stay at D.C. Central Kitchen forever, I would,” McClure added.