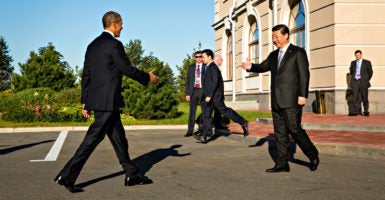 President Barack Obama heads to China on Friday to participate in his final G-20 leaders summit—marking a legacy critics say has left America weaker on the global economic front.

While still the world’s largest economy, the United States has experienced weak growth since the Great Recession because of policies that make America less competitive, said James Amos, president and CEO of the National Center for Policy Analysis, a free-market think tank.

“The president has used one crisis after another to transform from a free enterprise system to a large social context that government can fix all our problems,” Amos, a former CEO who also was chairman of the International Franchise Association, told The Daily Signal in a phone interview. “If the private sector is working to support the public sector, we are not going to be competitive internationally.”

Nevertheless, Amos said he believes the summit of G-20 leaders could benefit both the U.S. and global economy.

“It is a giant photo op, but business gets done through relationships,” Amos said. “It’s a question of showing leadership, whether you are talking about the G-20 or other areas.”

The economy has underperformed for the entire Obama presidency, said James Roberts, a research fellow for economic freedom and growth at The Heritage Foundation.

“The G-20 has become a mini-U.N., with cronyism and corruption and promoting policies of spending more and taxing more,” @JamesMRoberts3 says.

But, Roberts said, there is little the U.S. or other countries could learn from G-20 policies.

“The G-20 has become a mini-U.N., with cronyism and corruption and promoting policies of spending more and taxing more,” Roberts told The Daily Signal.

The G-20, or Group of 20, is made up of representatives of rich and developing nations. Its members are the European Union and these 19 countries: Argentina, Australia, Brazil, Britain, Canada, China, France, Germany, India, Indonesia, Italy, Japan, Mexico, Russia, Saudi Arabia, South Africa, South Korea, Turkey, and the United States.

A more precise focus should be doing away with trade barriers by confronting Chinese protectionism, promoting cybersecurity, and opposing wasteful and corrupt state-owned enterprises, said Roberts, who edits portions of Heritage’s annual Index of Economic Freedom.

Writing in the “2017 Global Agenda for Economic Freedom,” a Heritage report released this week, Roberts called for expanding the G-7 to include more market-based democracies and downgrading the G-20.

China will host the summit in the city of Hangzhou.

White House press secretary Josh Earnest has said Obama will discuss many key issues—particularly with Chinese President Xi Jinping. Earnest cited climate change as an issue on which Obama has worked well with his Chinese counterpart, and said more work is needed on cybersecurity.

“The United States welcomes that peaceful rise, and we welcome the kind of corresponding investment in international institutions and international norms that have presented a hospitable environment for China’s rise,” Earnest told reporters Tuesday, adding:

That will be the nature of a lot of the kinds of discussions that President Obama will have, not just with President Xi but with other countries in the Asia Pacific that are a little uneasy right now about the questions that have been raised about China’s commitment to those kinds of international norms, international institutions.

Chief among those concerns has been the South China Sea.

Last month, a judicial panel in The Hague ruled that China had no legal claim to most of the South China Sea, which carries about $5 trillion in annual trade. The panel also faulted China for building artificial islands for military purposes. The Chinese government hasn’t accepted The Hague’s decision.

“A balance or lack of it in China would mean enormous amounts of money for U.S. trade, so this is a significant issue for U.S. business,” Amos said.

Meanwhile, China has agreed to international standards on cyberespionage, even as questions remain about the country’s behavior.

Obama is scheduled to have a bilateral meeting Saturday with Xi, then participate in the G-20 summit Sunday and Monday.

Heritage’s “2017 Global Agenda for Economic Freedom” suggests downgrading the G-20 meetings by returning to this original intent. For the U.S., this would mean sending the Treasury secretary and Federal Reserve chairman, but not the president.

The Heritage report also argues that Russian President Vladimir Putin’s policies on the economy and military fronts are enough reason to downgrade the G-20.

Further, it says, the G-20 promotes heavy taxation and spending policies as a means to stimulate individual economies.

“Yet rather than concentrating on reducing the need for more taxation by cutting government spending, G-20 leaders usually seem to concentrate on policies to fight tax avoidance, ‘base erosion and profit shifting,’” Roberts writes in the report. “In other words, G-20 leaders think about creative new ways to tax so they can continue spending.”

Organizations within the G-20 show their political leanings, such as the G-20 Green Finance Working Group and the G-20 Employment Working Group, the report argues.

G-20 organizers also decide which companies, labor unions, and other private entities participate in the meetings—giving them special access to world leaders.

“That is practically a definition of cronyism,” the Heritage report says. “It is all the more ironic since one of the many subjects covered in the G-20 process is corruption.”