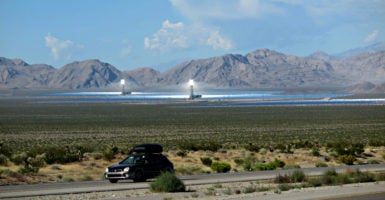 The Ivanpah Solar Electric Generating System, in the Mojave Desert of California, is one of the largest solar projects in the country. (Photo: Paul Harris/Photoshot/Newscom)

Reece Brown is a member of the Young Leaders Program at The Heritage Foundation.

Consumers are getting burned by a taxpayer-subsidized solar power plant in California’s Mojave Desert.

An immensely wealthy consortium owns the plant. Government regulators approved a contract forcing consumers to pay four to five times the going rate for electricity produced by the plant.

And the energy, because of an inordinate use of gas, turns out to be nowhere as “green” as folks thought they’d get.

The Ivanpah Solar Electric Generating System is one of the largest solar projects in the country.

Together, these companies command market capitalization in excess of $1 trillion. One would think that with such enormous capital and financial sophistication, Ivanpah’s owners could have undertaken this project without government support.

The owners of the Ivanpah solar power facility received a federal loan guarantee of $1.6 billion, a tax credit in excess of $500 million, and contracts to sell power at four to five times the market rate of electricity. All predicated on the production of solar power.

But Ivanpah is not just a solar power plant. Many solar plants use solar cells to convert the sunlight directly into electricity.

Ivanpah is different. It uses mirrors to concentrate sunlight for generating steam that then drives turbines. These turbines produce energy in a similar fashion to that of traditional coal, natural gas, or nuclear power plants.

However, Ivanpah has a problem those technologies don’t: intermittency. Meaning the sun doesn’t always shine.

For Ivanpah, this is an even bigger problem than it is for plants that use solar cells, because at night the temperature in the desert falls dramatically and the water cools down.

So, the water must be reheated the next morning before power production can resume. Instead of relying on the sun to reheat the water, the Ivanpah plant burns natural gas.

A true description of Ivanpah, then, is that it is a hybrid solar-natural gas power plant. The electricity is not entirely solar produced, yet it is sold at the higher prices regulators allow for solar power, a benefit worth millions of dollars per year to Ivanpah’s owners.

Ivanpah is abetted in this mischaracterization by the California Energy Commission, whose strained interpretation of the rules allows Ivanpah to ignore gas used to heat the water, unless the “generator breaker is closed.” This means that none of the gas burned at night to reheat the water is counted toward the caps placed by government on natural gas use in generating power.

Those caps require natural gas to be responsible for less than 5 percent of the overall generation of power, with 95 percent coming from solar. In reality, the California Energy Commission’s own data show Ivanpah’s gas use is responsible for closer to 30 percent of its output than it is to 5 percent.

That’s how Ivanpah hits the “bad policy” trifecta that is all too common in today’s heavily subsidized renewable energy markets:

Rich consortium gets huge subsidies from taxpayers to build a plant. Check.  Regulators OK a contract that forces consumers to pay four to five times the going rate for its product. Check. And the product actually is nowhere near as “green” as people thought it’d be. Check.

The inconvenient truth is that Ivanpah uses a lot of natural gas to generate “solar” electricity, and neither the California Energy Commission nor the U.S. Department of Energy seems to care enough to come clean about it.

This article has been modified to correct the amount of the federal loan guarantee to Ivanpah.