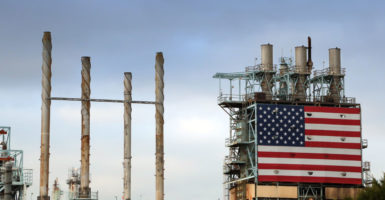 The fracking revolution has turned the United States into a net exporter of oil. (Photo: Maureen Sullivan/Contributor/Getty Images)

“We can’t just drill our way out of the problem.”

That was the oft-repeated phrase of President Barack Obama,  who throughout his presidency argued that the key to beating higher gasoline prices was to subsidize alternative energies, such as solar and wind.

It was a common sentiment from those who fretted that the world had reached “peak oil,” and that America was simply doomed to become increasingly reliant on a few big international oil producers for a rapidly dwindling resource.

It also played well into the narrative that fossil fuels were inherently evil, destroying the planet by escalating climate change.

But the doomsayers were wrong.

Thanks in large part to American ingenuity and technological innovation, the script has been flipped—and the dividends have been enormous.

This is a huge departure from what has transpired after major incidents in the Middle East in the past. As Foreign Policy’s C.K. Hickey noted:

This time was different.

U.S. oil production has boomed in the past decade, thanks largely to innovation in the use of fracking, which has allowed the U.S. to tap into not only enormous amounts of shale oil, but also natural gas and other petroleum resources.

In fact, U.S. production has ramped up so much that in 2018, the U.S. became a net exporter of oil for the first time in nearly 75 years.

Perhaps even more incredibly, for a brief time at the end of 2019, the U.S. surpassed Saudi Arabia to become the world’s top oil exporter.

That, of course, produced jobs and a boon to the American economy, but it also created the conditions for a global oil market more resistant to supply and price shocks—which were sometimes created by OPEC nations. Many of the latter are in the Middle East or generally hostile to the U.S.

But now, a world suddenly deprived of, say, Iranian oil, can rely increasingly on U.S. oil.

As political scientist Walter Russell Mead wrote for The Wall Street Journal, the Middle East is now a region “being fundamentally reshaped by drillers in Texas, Pennsylvania, North Dakota, and elsewhere.”

As my colleague Nick Loris, an expert on energy and environmental policy, has noted, the huge increase in domestic oil production doesn’t mean that the U.S. is truly energy independent. We are still very much affected by the global supply and the actions of countries abroad.

Nevertheless, the surge in production has transformed the American economy and given the U.S. an invaluable tool in foreign relations.

That has transpired in spite of efforts by the Obama administration and the left to strangle an industry they fundamentally dislike, an effort that would be stepped up massively if the so-called Green New Deal became law.

The Green New Deal, a badly disguised Trojan Horse for socialism and of dubious environmental benefit, would end and reverse the oil production advances that have been such a broad-based benefit for the U.S. economy.

Hopefully, the strong economy and stable oil markets amid turmoil in the Middle East will serve as a reminder that reversing the incredible advances in oil drilling of the past decade would be a huge mistake.