Obama Was Wrong on Oil. We Did ‘Drill Our Way Out of the Problem.’ 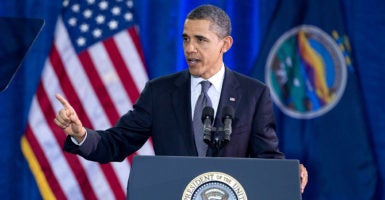 When gas prices topped $4 per gallon in May 2011, President Barack Obama said, “We can’t just drill our way out of the problem.”

Throughout his presidency, Obama stated some version of that sentiment every time he wanted to push to subsidize alternative energy sources.

More than seven years later, human ingenuity, technological innovation, and the power of the free market have proven him wrong. To the benefit of American families across the country, the United States is now the largest global producer of crude oil.

The dramatic increase in supply shows drilling is not just a “bumper sticker” slogan, as Obama called it in his weekly address in February 2012, but a path to energy independence, prosperity, and jobs.

Domestic extraction has lowered gas prices for millions of drivers and saved them hundreds of dollars a year at the pump. A number of factors contribute to the price of gasoline, but crude oil is the largest.

In 2017, crude prices made up 50 percent of the price of gas, with federal and state taxes (19 percent), distributing and marketing (17 percent), and refining (14 percent) accounting for the rest. Over the past decade, crude oil accounted for 61 percent of the total cost of a gallon of gas.

The economic benefits of the shale boom extend well beyond crude oil production and lower prices at the pump. When combining natural gas and other petroleum products, the U.S. has been the world leader for seven years.

In the last eight years alone, chemical companies have invested more than $200 billion in 333 projects—and cited the shale boom as the reason why they’re investing in America.

There’s no time like the present, but the future of U.S. oil and gas production looks incredibly bright, too. According to a recent report from IHS Markit, production in the Permian Basin of West Texas and New Mexico could double by 2023. The Bureau of Land Management’s lease sale in New Mexico grossed nearly $1 billion in bonus bids for 142 parcels.

In its draft proposed program in January, the Department of Interior listed 47 potential lease sales off the coasts of Alaska, and in the Pacific, the Atlantic, and the Gulf of Mexico, and would make more than 90 percent of the total federal acreage available for exploration and development. These changes stand in stark contrast to the Obama administration’s last order, which placed all but 6 percent of the Outer Continental Shelf off-limits.

Drilling doesn’t have to be the solution. But Obama and others who have dismissed conventional resource extraction are ignoring that drilling has been an extremely effective solution when energy prices get uncomfortably high.

Drivers will examine their options as well, whether carpooling, finding alternative modes of transportation, or, over time, purchasing a more fuel-efficient vehicle.

Washington does not need to dictate the solutions because it can do more harm than good by catering to special interests and breeding cronyism. A successful energy policy is one that unleashes free enterprise and not government planning, quotas, or subsidies.