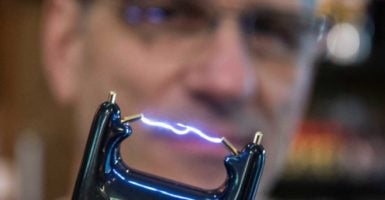 The Second Amendment gives Americans the right to self-defense, and the District of Columbia should not try to take it away from them. (Photo: Boris Roessler/dpa/picture-alliance/Newscom)

Nathan Howe is a member of the Young Leaders Program at The Heritage Foundation.

Gun rights advocates have fired a new salvo in the ongoing saga against the District of Columbia’s overly restrictive gun laws.

Three District residents have filed a lawsuit in the U.S. District Court for the District of Columbia seeking to overturn a law making it a crime to “receive, possess, control, transfer, offer for sale, give or deliver any destructive device” (D.C. Code § 7-2502.01(a)), which would include “any device … intended to stun or disable a person by means of electric shock” (D.C. Code § 7-2501.01(7)(D)). They are likely to win.

From 1976 until 2008, when the Supreme Court issued its decision in District of Columbia v. Heller, the District banned the ownership of handguns by private citizens.

In Heller, the court held that, “the District’s ban on handgun possession in the home violates the Second Amendment, as does its prohibition against rendering any lawful firearm in the home operable for the purpose of immediate self-defense.” The Supreme Court said that the Second Amendment “elevates above all other interests the right of law-abiding, responsible citizens to use arms in defense of hearth and home.”

The plaintiffs in this case—Crystal Wright, Brendan Turner, and Traci Dean—have indicated that they have a legitimate need to defend themselves, but each has stated a desire to use a Taser or stun gun against an assailant rather than a gun, knife, or some other form of lethal force. The plaintiffs argue that pursuant to Heller, the Second Amendment extends to “all instruments that constitute bearable arms, even those that were not in existence at the time of the founding.”

It is ironic and somewhat bizarre that the District would recognize, as it must, that a blanket prohibition against the possession of hand guns (an implement designed to be able to render lethal force) is unconstitutional, but continue to maintain its position that a prohibition against the possession of implements designed to render non-lethal force is somehow permissible.

To be sure, there are other forms of nonlethal force, such as pepper spray, available that are not prohibited (although pepper spray is regulated).

However, as the plaintiffs note in their complaint, they are also likely to be less effective means of defense. Unlike a Taser or stun gun, pepper spray (1) can only be utilized in close proximity to an assailant, (2) is often ineffectual against someone who is highly agitated or intoxicated, (3) must be deployed on an attacker’s face (a small target), and (4) can end up incapacitating the victim instead of the assailant if used in a windy environment.

Moreover, according to a study by the National Institute of Justice, any concerns about the potential lethality of stun guns if not employed correctly appear to be overblown.

Shortly after the death of Justice Antonin Scalia, who wrote the majority opinion in Heller, the Supreme Court issued a per curiam opinion (meaning it was a unanimous written decision of the court, but without attribution as to the opinion’s author) in Caetano v. Massachusetts, overturning a decision of the Massachusetts Supreme Court, which had upheld that state’s law prohibiting the possession of stun guns.

In doing so, the Supreme Court rejected the lower court’s reasoning as plainly inconsistent with Heller. Other courts and constitutional scholars have reached similar conclusions about outright prohibitions against the possession of stun guns for self-defense.

Wright writes a controversial blog under the moniker “Conservative Black Chick.” She has received numerous threats, including an email from someone stating his intention “to break into her home and bash her head in.” Turner has been the victim of armed robbery on two different occasions. Dean is a nurse who often returns from work late at night. These law-abiding citizens want to defend themselves, should the need arise, without having to kill their assailant, even though they would probably have every legal right to do so.

The Second Amendment gives them that right, and the District should not try to take it away from them.

In the Caetano case, Justice Samuel Alito wrote a concurring opinion in which he stated: “If the fundamental right of self-defense does not protect Caetano, then the safety of all Americans is left to the mercy of state authorities who may be more concerned about disarming the people than about keeping them safe.”

This is something that should concern us all. Even a well-intentioned and well-trained police force will rarely be able to respond in time to prevent a potentially deadly assault. When the average citizen is confronted by a deadly assailant, the old saying holds true: When seconds count, the police are minutes away.