No Time for Losers: Why Queen Can’t Pick Its ‘Champions’ 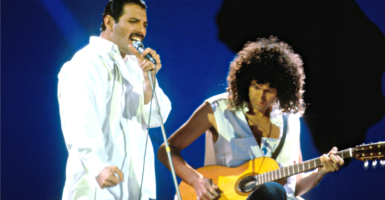 The late Freddie Mercury, left, and Brian May of Queen perform at the Live Aid charity concert at Wembley Stadium in London on July 13, 1985. (Photo: David Plastic/Retna UK/Newscom)

—Queen, “We Are the Champions”

The playing of hit songs long has been associated with American presidential campaigns.

But just as sure as politicians love to create their own soundtrack, the playing of popular music in a political setting also attracts controversy.

The surviving members of the rock group Queen objected to the playing of its 1977 hit “We Are the Champions” when nominee Donald Trump took the stage at one point during the Republican National Convention.

An unauthorised use at the Republican Convention against our wishes – Queen

Other famous musicians and their representatives, including the Rolling Stones and the estates of George Harrison and Luciano Pavarotti, claimed their music was performed at the GOP convention without authorization.  Similarly, this week the producers of the movie “Air Force One” asked that Trump stop using the main theme from the film’s score.

This is not a new phenomenon. Bruce Springsteen objected, for example, when both Ronald Reagan and Bob Dole played his “Born in the U.S.A.” during campaign events. Sting asked George W. Bush to stop using the song “Brand New Day” at rallies. Sam Moore of Sam and Dave fame objected to Barack Obama playing “Hold On, I’m Comin’” at campaign events.

Sometimes these entreaties work, in that the politician in question will stop using a song voluntarily.

But are the politicians required to do so?  In most cases, the answer is clearly no.

Artists who claim politicians are using their music “without authorization” overlook the fact that most music licensing is handled by the major music licensing companies BMI, SESAC, and ASCAP.

“We Are the Champions” and other Queen songs are part of BMI’s catalog. It and the other two organizations collect license fees on behalf of songwriters, composers, and music publishers and distribute them as royalties to those members whose works are played or performed everywhere from pro football games to political rallies.

If a campaign is holding many events at dozens of different venues, it may be easier for the campaign itself to obtain a public performance license from ASCAP (and possibly one or more of the other two U.S. performing right organizations if the music is licensed through one of them). This would guarantee that, no matter where you have a campaign stop, it would be in compliance with copyright law.

No communication with individual artists was necessary for the Republican National Committee to obtain the license to use their music (assuming, of course, that the RNC obtained licenses).

Musicians choose to work with a licensing company such as ASCAP because it is “dedicated to protecting members’ rights and obtaining fair compensation for the public performance of their copyrighted musical works.”

A licensing company allows a musician to increase revenue by streamlining the legal requirements for individuals who purchase the rights to his music. Negotiations on an individual basis would be overwhelming for artists, as well as inefficient.

Thus, the RNC’s use of Queen’s music was “authorized” even though the party communicated with a licensing company rather than directly with the band.

If the surviving members believed their fans were confused by the political message at the GOP convention, they could clarify publicly that they were not among Trump’s supporters. But claiming that the use of Queen’s music was “unauthorized” is factually inaccurate.

What’s more, political creed is no ground to discriminate against a user of the music, according to ASCAP’s nondiscrimination policy. It states:

LICENSEE recognizes that ASCAP must license all similarly situated users on a nondiscriminatory basis. … Examples of such modifications are statements of equal employment opportunity or nondiscrimination on the basis of race, creed, color, sex or national origin.

Of course, Queen can renegotiate its arrangement with BMI and withdraw “We Are the Champions” from its blanket license, thus preventing Trump or others from using that song in the future.

The government cannot enable a music artist to shut up a politician who, having obtained a license, chooses to use that artist’s music. Musical performances or the playing of recordings, including at political events, are protected by the First Amendment’s guarantee of freedom of speech.

Indeed, the Supreme Court has recognized that “the selection process of which music to play—and correspondingly, which music not to play—reflects the expressive and communicative choices of the speaker,” and is shielded by the First Amendment.

So even if Queen’s members find Trump’s use of their music unappealing, they cannot call on the government to silence him.

Of course, that doesn’t mean he could claim onstage that Queen had endorsed him.

What he or the party purchased was the right to the public performance of Queen’s music, not a political endorsement. The band’s members can, if they so choose, exercise their own First Amendment rights to make that clear to the public.

Granting veto powers to musicians on the use of their works would seriously chill free speech.

What if a left-leaning rocker required security at the doors of a concert hall only to give entry to people who were of a certain political persuasion? Or a Gregorian Chant Schola refused to let an LGBT advocacy group enjoy its music?

No one can dictate the political preferences of another.

This commentary has been modified to specify that “We Are the Champions” is part of BMI’s catalog and that Queen has the option of withdrawing that song from its blanket license.