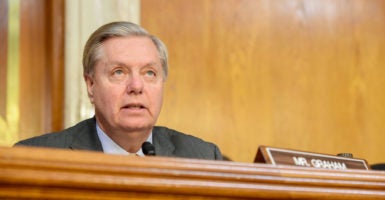 Prominent Republicans in the House and Senate have resurrected a fight over the Export-Import Bank after slipping language into appropriations bills that would allow the contested agency to, in effect, approve transactions benefiting its largest beneficiaries.

Appropriators in both chambers passed legislation changing Ex-Im’s quorum requirements for its board of directors, but lawmakers are likely to see debate over the bank reignite in the fall over a potential omnibus spending package funding the government in 2017.

The House Appropriations Committee passed an appropriations bill funding state and foreign operations Tuesday, which included an amendment from Rep. Charlie Dent, R-Pa., to allow Ex-Im’s board of directors to begin approving transactions of more than $10 million.

Ex-Im provides taxpayer-backed financing to foreign countries and companies for the purchase of U.S. exports. For the last seven months, the bank has been unable to approve high-dollar transactions benefiting its largest beneficiaries.

Ex-Im’s charter lapsed for five months last year—the first time the bank’s charter has expired in its 82-year history—following a fight over the agency. When Congress voted to bring it back to life in November, only two of the five seats on Ex-Im’s board of directors were filled, which left the agency without a quorum and unable to approve transactions of more than $10 million.

President Barack Obama nominated Republican Mark McWatters to fill the third board seat in January, but his nomination has been held up in the Senate Banking Committee by Chairman Richard Shelby, R-Ala.

Dent’s amendment would change Ex-Im’s quorum requirement beginning Oct. 1. Under the proposed changes, valid until September 2019, the membership of the board would constitute a quorum if there are less than three people with seats on the bank’s panel.

If both the Senate and House passed the changes to the law, the current board of directors, which has just two seats occupied, would be able to begin approving transactions of more than $10 million.

“We have rules governing the Ex-Im Bank’s board for a reason,” Rep. Jim Jordan, R-Ohio, said in a statement to The Daily Signal. “Changing those rules so that fewer people have more power isn’t the answer. That’s precisely why the American people are so fed up with this town.”

Jordan, who is a vocal opponent of Ex-Im, chairs the House Freedom Caucus, a 40-member group that came out against the bank last year.

“A strong majority of Congress supported the policy of reauthorizing the bank, the majority in the House,” Dent told The Daily Signal. “It’s clear that by withholding appointments to the board that those who are opposed are trying to obstruct the bank from fully operating.”

“We felt it was not appropriate that the small minority would try to obstruct what a strong majority of Congress intended, which is for the bank to be reauthorized and fully functioning,” he continued.

Action in the Senate

Before the House voted to change the quorum requirement for Ex-Im’s board, the Senate Appropriations Committee passed its own version of the State and Foreign Operations appropriations bill, which included language from Sen. Lindsey Graham, R-S.C., addressing vacancies on the bank’s panel.

Late last month, the panel approved changes to the law—which Dent’s amendment mirrored—that would allow the membership of Ex-Im’s board to constitute a quorum if there are three vacant seats.

A staffer with the Senate Banking Committee said that Shelby, who heads the panel, wasn’t told that the State and Foreign Operations appropriations bill included language changing the quorum for Ex-Im’s board.

Because the Senate Banking Committee is Ex-Im’s authorizing committee, Graham broke protocol by not consulting with the committee before adding legislation changing Ex-Im’s quorum requirement to the appropriations bill, the staffer said.

A spokesman for Graham told The Daily Signal that the South Carolina senator “strongly supports a full-functioning” bank and noted that the bill passed the committee unanimously.

“If the French, Chinese, and others want to shut down their export banks and credit agencies, we’ll do the same,” spokesman Kevin Bishop said. “But until then, we aren’t going to unilaterally disarm. We need [the] Ex-Im Bank up and running to ensure American manufacturers and American workers are on a level playing field in the international marketplace.”

Republican leaders in the House and Senate are working to pass 12 individual appropriations bills, but with the number of working days left dwindling, reports indicate lawmakers could pass an omnibus spending bill for 2017 in December.

If the omnibus spending bill includes changes to Ex-Im’s quorum, it would likely set up a showdown between conservatives who oppose the bank and its Republican supporters.

“Typically, if the language is included in both [Senate and House] bills, then it withstands a greater chance of making it in a final bill,” Dent said of Ex-Im language being included in an omnibus spending bill. “It should be an issue that would be agreed to. It doesn’t mean it would be automatically inserted, but I think it should be.”

“The fact its in both bills means it has a better chance of getting into the final [spending package],” he continued.

Shelby, the Senate Banking Committee staffer said, will continue to oppose nominations to Ex-Im’s board.

In doing so, Holler continued, Congress would be incentivizing the executive branch to avoid the confirmation process, since seats on Ex-Im’s board could remain open and the board could still approve transactions of more than $10 million.

Additionally, Holler agreed that there are reasons to be concerned about an omnibus spending package since including the language would effectively circumvent Shelby.

“We’re going to bypass a Senate committee chairman, a Republican who won a primary vote, who has the gavel because Republicans have the Senate, and we’re going to override him in a lame duck with an appropriations rider that should be a concern to the extent that this is one of those issues that percolates to the top,” Holler said. “It’s another example of why these omnibus spending bills are bad. There’s just so much packed into them, and it’s hard to know every detail.”

There are currently 30 transactions worth $20 billion awaiting board approval.

The bank sparked debate in Congress two years ago when conservative lawmakers, arguing the bank is an engine of cronyism and corporate welfare, challenged its charter renewal.

Supporters of the bank, which include Republicans and Democrats, said the institution creates jobs and helps small business compete globally.

Ex-Im’s charter expired last July, but it was revived in December.