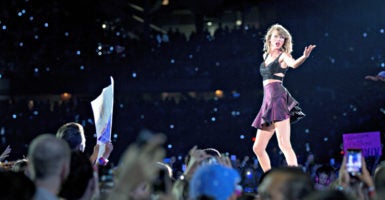 The lyrics were exquisitely tailored and told a story with swift staccato phrasing:

Just think while you’ve been getting down and out about the liars and the dirty, dirty cheats of the world,

You could’ve been getting down to this sick beat.

Was Judge Gail J. Standish standing in the back of the stadium? Were tears rolling down her cheeks as the raucous concert music flowed over and about her in what could only be described as a spiritual experience?

Standish, you may recall, is the California judge who last fall used words from singer-songwriter Taylor Swift’s songs in dismissing a lawsuit that accused Swift of stealing the lyrics to her hit “Shake It Off.”

Trademark protection incentivizes Taylor Swift to maintain the quality of her products.

Cynics may laugh, but words and phrases have meanings evocative of feelings and objects that are imposed by fancy. Trademarks stand as fanciful tags intended by authors to be associated with their products.

Artists such as Swift have been proactive about making sure the phrases they coin are protected by trademarks. “This sick beat” and “party like it’s 1989” are, according to a recent court case, phrases that evoke the music of Taylor Swift—who called her latest album “1989.”

What is a trademark and how is it protected?

The U.S. Patent and Trademark Office explains that a trademark “is a brand name.” It goes on:

A trademark or service mark includes any word, name, symbol, device, or any combination, used or intended to be used to identify and distinguish the goods/services of one seller or provider from those of others, and to indicate the source of the goods/services.  . . .  Although federal registration of a [trademark] is not mandatory, it has several advantages, including notice to the public of the registrant’s claim of ownership of the mark, legal presumption of ownership nationwide, and exclusive right to use the mark on or in connection with the goods/services listed in the registration.

As the government agency’s definition suggests, what can count as a trademark is a word or phrase that is a short, easily identifiable tag unique to the product. Often trademarks are made up of words such as “Xerox,” phrases such as “Just do it,” or symbols such as the Nike swoosh.

A key purpose of trademarks is to avoid consumer confusion by allowing consumers to associate products of a certain quality with certain markers, such as Coca Cola versus Pepsi.

Just so, the trademark of artistic property in the lyrics of a song allows the author to regulate the quality of the items to which her lyrics are attached: Taylor Swift may like her lyrics on a tasteful T-shirt design but not on a sloppy one. Consumers can expect a level of quality from items to which Taylor Swift’s lyrics are attached that would not be certain without trademark protection.

Trademark protection also incentivizes Swift to maintain the quality of her products, because if she couldn’t distinguish her products from other peoples’ products in meaningful ways then she would lack an incentive to keep up the quality.

Indeed, when every generic brand is aping producers’ marketing strategies as well as the ideas behind them, there is considerably less accountability for product quality in general. Thus, Coca Cola invests in quality control, safe in the knowledge that cheap, lower-quality generic colas cannot use its brand name to confuse soft drink purchasers.

Consistent with avoiding confusion and maintaining product quality, you cannot trademark a term that is popularly used to describe a category of goods made by multiple producers, such as “thermos” and “aspirin.” (Other limits also exist to what is “trademarkable,” as I explained in a previous article.)

It is somewhat striking that Taylor Swift can sue you for trademark infringement if you put the words “Party like it’s 1989” on T-shirts and sell them, but she cannot be sued for copyright infringement, as Standish ruled, when 92 percent of the lyrics of her 2014 song “Shake it Off” are in the 2013 song “Haters Gone Hate” written by Jesse Braham (sometimes identified as Jesse Graham).

However, this superficial discrepancy is due to the fact that there are different purposes behind copyright and trademark.

While trademarks are short tags that are tied to and call to mind a particular product, copyright involves temporary federal legal protection for “original works of authorship” fixed in a tangible form, including literary, dramatic, musical, artistic, and certain other intellectual works.

Copyright protection also requires a certain degree of originality. It does not extend to works consisting entirely of information that is common property and containing no original authorship, such as standard calendars or lists taken from publicly available information, as with a telephone directory. (See here for more information on copyright coverage and exclusions).

Also, once a copyright’s term expires, the original work it protects enters the public domain and may be freely copied.  Trademarks, however, do not expire, as long as their owners continue to actively use them in commerce.

In short, Taylor Swift can use commonly used phrases when she composes new songs. But by the same token, she cannot keep other artists from inserting common phrases from her songs in their own works.

Legally speaking, Swift can prevent others from copying her distinctive brand. But she cannot monopolize common phrases that are part of our common inheritance of the English language.