Communism Still Persists. We Must Remember Nations Where People Are Not Free. 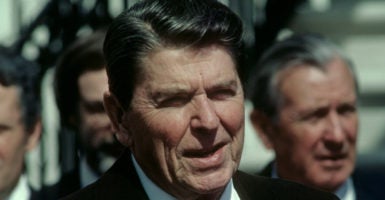 Communism is a cancer that must be removed lest it spread. That historical lesson led President Ronald Reagan, after four decades of containment and accommodation, to lay down a new policy to end the Cold War: “We win and they lose.”

As a result, Moscow found itself falling far behind in an ever accelerating arms race and conceded defeat.

Communism collapsed in Eastern and Central Europe in 1989, followed by the dissolution of the Soviet Union and the “evil empire” two years later.

But, unhappily, communism did not crash everywhere. It still persists—a quarter of a century later—in China (the most populous nation in the world), Cuba, Vietnam, North Korea, and Laos. And its traces are all too evident in the imperial actions of Russia, led by former KGB operative Vladimir Putin.

Which is why it is important to pause and commemorate National Captive Nations Week, established by President Dwight D. Eisenhower in 1959 and proclaimed by every succeeding American president.

By public law, Eisenhower stated, he and his successors must issue a proclamation “until such time as freedom and independence shall have been achieved for all the captive nations of the world” (emphasis added). We are not there yet.

The need for a Captive Nations Week was underscored in a Washington Post editorial that described how a Russian citizen was fined 200,000 rubles (about $3,100) for posting on the internet the historical fact that the Soviet Union collaborated with Nazi Germany to invade Poland in September 1939.

Last year, Putin openly defended the Molotov-Ribbentrop Pact while his culture minister called the agreement—which precipitated World War II—“a colossal achievement of Stalin’s diplomacy.” In fact, it led to the “colossal” loss of millions of Russian, German, British, French, and other lives.

Communist China is equally determined to block websites and suppress basic truths such as the Tiananmen Square massacre of 1989. According to the Post, the Cyberspace Administration of China, “a powerful censorship agency,” has issued new rules to punish websites that publish unverified content.

“Unverified” means “unapproved” content, or news that is not what the Communist Party says is news, like China’s systematic suppression of free speech, a free press, open elections, an independent judiciary, a multiparty legislature, and religious freedom.

Both Russia and China, concluded the Post, share a “dangerous” vision that “information should be a ward of the state.” Borrowing from George Orwell, the newspaper titled its editorial about the Russian-Chinese attacks on freedom of information, “Big Brother clamps down.”

For 57 years, American presidents have proclaimed U.S. support of the captive nations, none more eloquently than Reagan in 1988 when he said, in a Rose Garden ceremony:

On behalf of Vice President Bush and myself, this pledge we make to you, to all the peoples of the captive nations around the world. America will never forget your plight, and we will never cease to speak the truth.

Your struggle is our struggle, your dream is our dream, and one day you will be free.

Given the apparent stability of China and other communist regimes, that prediction may seem starry-eyed. But we should remember that tyrants have always appeared to be invincible until the last moment before they fell—as happened with the sudden fall of the Berlin Wall and the collapse of Soviet communism without a shot being fired.