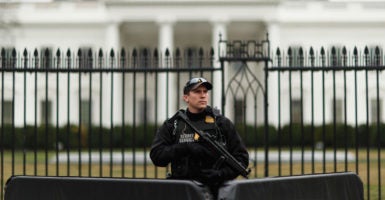 The Secret Service ranks as the worst subcomponent of a federal agency to work for. (Photo: Jim Bourg/Reuters/Newscom)

President Donald Trump signed legislation on Wednesday that funds overtime pay earned by members of the Secret Service in 2017 and 2018.

The problems at the Secret Service go beyond employee compensation, though. The Secret Service suffers from an under-staffed workforce, a lack of discipline, and a tarnished reputation stemming from a string of scandals during the Obama administration. It is for these reasons that the Secret Service is ranked as the worst subcomponent of a federal agency to work for.

In response to these problems, then-Homeland Security Secretary Jeh Johnson ordered an independent review of the Secret Service in 2014. The Protective Mission Panel, tasked with conducting the review, found that leadership and personnel were the two major problem areas in the Secret Service.

To remedy this, the panel suggested appointing “a strong leader from outside the agency who has a protective, law enforcement, or military background” as the next director of the Secret Service. The panel also recommended boosting the Uniformed Division by an initial 200 positions and the Presidential Protective Division by 85 positions.

The Uniformed Division protects certain high-profile facilities and venues, while the Presidential Protective Division safeguards the president and his immediate family.

So far, the Trump administration has fulfilled this leadership recommendation by appointing Randolph Alles as the new Secret Service director. The recommended boost in personnel has yet to be carried out.

According to the panel, both the agency’s Uniformed Division and Presidential Protective Division are “stretched beyond their limits.” This results in inefficiency, stress, over-work, and low morale.

Expanding the Secret Service workforce would afford each agent and officer the time to participate in increased training, thereby making the agency more effective. Also, employees would be able to take longer breaks off duty, allowing them to spend time with their families, recharge, and come back to work rested and ready to go.

Boosting the number of protective agents and officers would thus improve both morale and training. But in order to do so, the Secret Service’s budget needs to be increased.

The president’s 2019 budget request moved in this direction by asking for an additional $82 million for staffing growth. Unfortunately, the budget Congress ended up passing slightly decreased funding to the Secret Service, thus limiting its ability to address its long-neglected workforce problems.

The Secret Service can save some money by moving agents off of administrative duties and instead employing more specialized support staff. In the words of the Protective Mission Panel, “Filling important administrative functions with agents rather than professional administrators may not be optimal.”

The Heritage Foundation also recommends that Congress provide oversight over the agency to ensure disciplinary actions are carried through. While strong leadership and a larger workforce would undoubtedly incentivize employees to behave, the agency also needs accountability.

The Secret Service is tasked with a “no fail” mission, and that mission can only be achieved with proper management and workforce maintenance.

It is critical that the Trump administration and Congress pursue these and other reforms identified by the Protective Mission Panel.