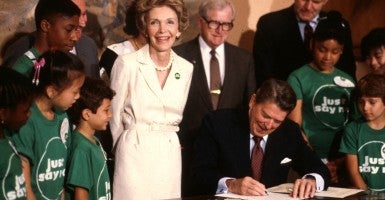 The “Just Say No” generation to whom Nancy Reagan dedicated herself can rightfully look back with gratitude for the protection she marshaled on their behalf. (Photo: Pamela Price/ZUMAPRESS/Newscom)

Brian Blake is a senior fellow at Hudson Institute where he focuses on U.S. domestic policy.

When the Reagans moved into the White House on Jan. 20, 1981, drug use, particularly among teenagers, was hovering near the highest rates ever measured. Of that year’s graduating class, 65 percent had used drugs in their lifetimes, and a remarkable 37 percent were regular drug users.

After the upheaval of the 1970s, Americans had chosen in Reagan a strong, optimistic leader to guide them to a more hopeful future. But there could be little real hope while one of the ’70s’ more damaging legacies—astronomic drug use—was consuming the rising generation.

Fortunately for that generation of young people, Ronald and Nancy Reagan were stronger than the threat.

Eight years later, when the Reagans left Washington, only 19.7 percent of 1989’s graduating class were regular drug users, a 47-percent reduction. And the trend that began under their leadership persisted until it reached an all-time low of 14.4 percent in 1992, 61 percent lower than 1981.

While it is simplistic to credit Nancy Reagan alone with this downturn, it is impossible to ignore her leadership and the massive shift she led against the drug culture. Her off-the-cuff response to a young Oakland girl who asked her what to do if confronted with drugs became a clarion call: “Just say no.”

This clear, unequivocal stand against drugs galvanized the nation by placing a moral stake in the ground: Illicit drug use is wrong, harmful, and not compatible with a free society. It provided an example parents, teachers, community leaders, and especially young people could follow when confronting drugs.

Nancy Reagan succeeded in changing the culture. By the spring of 1989, illegal drugs were Americans’ number-one concern. Reagan’s call “to be unyielding and inflexible in your opposition to drugs” was even taken up by Hollywood. The dangers of drugs became a common theme on television programs, particularly those with family audiences, spurring discussions between parent and child.

In the days since Nancy Reagan’s passing, those who seek to normalize drug use have been working to obfuscate the clear evidence of success of the Reagan-era anti-drug efforts. “Just say no” was futile, they claim, ignoring the clear downturns in drug use that occurred when Americans united against drugs. For those who think drug use should be accepted and even encouraged, the clear and simple truth must be suppressed. The reality of drug use that every family member of an addict knows must be ignored.

But Nancy Reagan achieved her goal. She sought to change the nation’s ambivalence about drugs, and attitudes clearly changed.

Since 1975, the Monitoring the Future study has tracked both teen drug usage rates and how teen attitudes about drugs have changed over time. Understanding attitudes is critical to drug prevention, because it is a foundation of behavior change, for good and ill.

It is exceedingly difficult to look at the major changes in youth attitudes toward drugs, as measured through “perceived harmfulness,” and not see the fruits of the cultural shift Nancy Reagan led. To take one example, in 1980, only 50 percent of high school seniors thought using marijuana “regularly” was harmful. By 1988, it was 77 percent, where it remained until 1993 (not coincidentally, during the Clinton administration, when drug use started creeping up again).

This leads us to where we are today. Not surprisingly, after eight years of an administration that downplays the dangers of drugs, refuses to enforce federal drug laws, and tacitly endorses drug legalization “experiments” in a few states, America’s young people see drugs in a much more positive light.

Only 32 percent now perceive using marijuana “regularly” as harmful, a number even lower than the drug-soaked 1970s. As would be expected, teen usage rates have begun to increase, as shown in The Heritage Foundation’s Index of Culture and Opportunity, with marijuana leading the way. This is happening at the same time that “commercialized” marijuana is breaking records for potency, and scientists are sounding the alarm about marijuana’s link to permanent neurological damage. Most concerning, heroin overdose deaths have increased a catastrophic 440 percent in the past eight years—and heroin use still, all too often, begins with marijuana use.

The “Just Say No” generation to whom Nancy Reagan dedicated herself can rightfully look back with gratitude for the protection she marshaled on their behalf.

In a 1987 letter to the actor Paul Newman, President Reagan extolled the first lady’s work on drugs: “I believe [Nancy] has done more and continues doing more than any other single individual, particularly with regard to young people to whom she is totally dedicated.” Her efforts resulted in millions of young people avoiding the lost opportunity, addiction, and even death that comes with drug use.

In the face of today’s rising drug use and the accompanying increases in addiction and overdose deaths, political leaders and our cultural elites should revisit Nancy Reagan’s anti-drug legacy, for it offers a clear example of how powerful moral leadership can alter the fortunes of a generation. We would best remember her by following her example, right now.