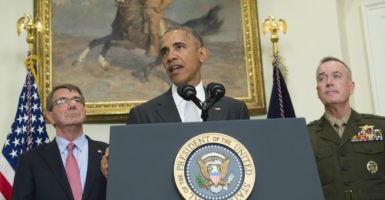 President Barack Obama announces that 8,400 troops will remain in Afghanistan when he leaves office. Standing behind him: Defense Secretary Ash Carter and Chairman of the Joint Chiefs of Staff Gen. Joseph Dunford. (Photo: Kevin Dietsch /UPI/Newscom)

President Barack Obama said he won’t withdraw nearly half the remaining U.S. troops in Afghanistan, much less completely withdraw as he originally intended, so the next president will have a stronger hand in a country where American forces have battled the Taliban and al-Qaeda for nearly 15 years.

“Today’s decision best positions my successor to make future decisions about our presence in Afghanistan,” Obama said Wednesday at the White House, announcing he will withdraw 1,400 troops rather than 4,300 troops.

In January, the next U.S. president will assume the most solemn responsibility of the commander-in-chief, the security of the United States, and the safety of the American people. The decision I’m making today ensures that my successor has a solid foundation for continued progress in Afghanistan as well as the flexibility to address the threat of terrorism as it evolves.

He previously planned to cut troop levels to 5,500 before leaving office. And earlier, he said he would withdraw nearly all U.S. troops.

In June, four former U.S. ambassadors asked Obama in a letter to leave the count at 9,800 troops, arguing 5,500 was insufficient.

The Heritage Foundation previously called for Obama to maintain the troop levels and announce those plans before the NATO Summit, to be held this weekend in Warsaw, as a way to encourage allied countries to maintain a presence.

Obama’s decision could have been worse, but this reduction doesn’t exactly strengthen the next president, James Carafano, vice president for foreign and defense policy studies at The Heritage Foundation, said.

“There are already too few forces to defend the ones they have, but I’m more comfortable with 8,000 [troops] than I am 5,000. We need 10,000 to 15,000,” Carafano told The Daily Signal in a phone interview. “This will at least provide room for the next president to make decisions on Afghanistan. This is not a strategy, but it allows him to leave office without another complete and utter failure.”

Afghanistan is still a mess, said Bill Roggio, a senior fellow at the Foundation for Defense of Democracies and editor of The Long War Journal.

“If the next president is interested in improving the situation, this could put more options on the table, but nothing in Afghanistan is sufficient at this point,” Roggio told The Daily Signal in a phone interview. He said:

The Taliban is still going toe-to-toe with Afghan forces. So, for the next president, this prolongs an Afghan policy that is already on life support. But 5,000 [troops] would have left the next president with almost no options.

What the Obama administration calls major combat operations in Afghanistan ended in 2014, but the U.S.-led coalition has remained to train and advise Afghan forces to combat the Taliban and al-Qaeda. Obama noted the 15th anniversary of the 9/11 terrorist attack is approaching, and that 2,200 Americans soldiers have died in Afghanistan.

“As president and commander-in-chief, I’ve made it clear that I will not allow Afghanistan to be used as safe haven for terrorists,” Obama said during his remarks.

Obama initially proposed to withdraw nearly all troops from Afghanistan by the end of his second term. However, last September, Taliban forces captured Kunduz, the first time the terror group had captured a major city since 2001.

After Kunduz, Obama decided to keep 5,500 U.S. troops in the country when he departs office. But, Obama said Wednesday, after consulting with generals and Defense Secretary Ash Carter, he instead will maintain a larger military presence.

The decision makes little sense and might have been guided by politics, said Thomas Donnelly, resident fellow in security studies at the American Enterprise Institute.

“To go from 9,800 to 8,400 is a cut that makes no sense politically, strategically, or militarily,” Donnelly told The Daily Signal in a phone interview. “He may be trying to split the difference between those in his [political] base who want us out entirely and those saying we don’t have enough.”

Donnelly said he doesn’t believe Obama did any favors for the next president.

“It is better than it might have been otherwise, but even 9,800 is barely adequate,” Donnelly said. “This is still a mess for the next president, but it could have been a bigger mess otherwise.”