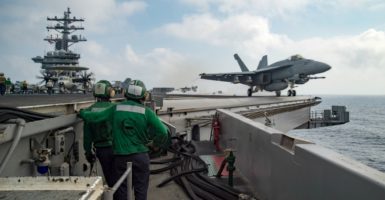 Rarely has the stark contrast between being an adversary of America and being an American friend been more in evidence than in the news this week from the western Pacific.

With the inauguration of Tsai Ing-wen, Taiwan saw the fourth democratic transition in the island’s leadership since the end of martial law in the 1990s. Tsai, head of the Democratic Progressive Party, had scored a major victory over the Kuomintang’s Eric Chu in elections this past January. As important, the Democratic Progressive Party won enough votes to also secure control of the Legislative Yuan, Taiwan’s legislature, reflecting broad public support.

While the Democratic Progressive Party has generally stood for Taiwan independence, Tsai has been very careful in her comments and remarks not to push for separation. Indeed, during the campaign, as well as prior visits to the United States, she has avoided raising the subject.

Nonetheless, Beijing has insisted that she must acknowledge the “one-China” principle, in effect rejecting the idea of Taiwan independence.

This would include accepting the “1992 Consensus,” a framework reportedly reached by semi-official representatives from the two sides, whereby both sides agreed that there was only one China, but held different unstated interpretations of what that meant, i.e. Republic of China (on Taiwan), including the mainland or People’s Republic of China, including Taiwan.

Tsai very prominently referenced her respect for the 1992 Consensus in her inaugural address. She did not, however, formulate it as explicitly as Beijing would prefer, and of course, she did not directly reference the “one-China” principle. Given both the centrality of Taiwan identity and independence in the nature of the Democratic Progressive Party, as well as the overwhelming victory it had scored, it is remarkable that she went as far as she did.

For Beijing, however, it is “all or nothing.” Failure to meet its formulation would lead to the suspension of cross-Straits dialogue, a threat that Beijing has now fulfilled. Chinese officials tied the ending of talks directly to Tsai’s failure to acknowledge that Taiwan is part of China or otherwise formally reject any move toward independence.

Normally, this would draw an American response. Under the Taiwan Relations Act, the U.S. has made clear that it supports stability in the Taiwan Straits; any effort at reunification must be peaceful and be supported by the population on both sides.

It is Beijing, not Taipei, that has refused to commit to a peaceful resolution. The People’s Republic of China has always reserved the right to forcibly reunify the two sides; the People’s Liberation Army is constantly preparing for a Taiwan contingency.

While the U.S. Navy dispatched only one ship to join the four People’s Liberation Army Navy ships attending the 2014 exercises, this time the U.S. Navy dispatched an entire carrier battlegroup, centered around the USS John Stennis. The battlegroup is apparently conducting joint maneuvering and training with the five Chinese ships Beijing is sending to Rim of the Pacific 2016. It is unknown whether the Chinese have also dispatched a spy ship, as they did to Rim of the Pacific 2014.

Meanwhile, the Taiwan navy remains on the sidelines. Unlike Beijing, Taipei has received no invitation from the Obama administration to attend Rim of the Pacific.

It’s getting harder to tell who is an adversary and who is a friend, based on how the U.S. government treats them.