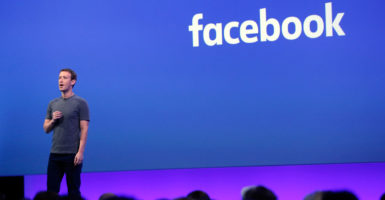 Facebook founder and CEO Mark Zuckerberg says the company is committed to being "a platform for all ideas." (Photo: Karl Mondon/TNS/Newscom)

Facebook is sharing publicly for the first time the core values that guide its news feed—the main source of news and information from your friends, family, and publications like The Daily Signal.

The decision to disclose more information about the news feed comes a month after the social media giant faced accusations of anti-conservative bias.

Conservatives who attended a meeting with Facebook founder and CEO Mark Zuckerberg in Menlo Park, California, on May 18 asked the company to be more transparent about how it operates. Today’s announcement is the latest step.

And not surprisingly, Facebook is again reiterating its commitment to be “a platform for all ideas”—a point Zuckerberg personally delivered to conservatives in the wake of Gizmodo’s May 9 story alleging Facebook suppressed conservative news.

“We are not in the business of picking which issues the world should read about,” Facebook says in a post announcing the values. “We are in the business of connecting people and ideas—and matching people with the stories they find most meaningful. Our integrity depends on being inclusive of all perspectives and view points, and using ranking to connect people with the stories and sources they find the most meaningful and engaging.”

Facebook’s news feed is different from the trending topics section that was the focus of Gizmodo’s story. Trending topics relies on human editors, while the news feed is driven by an algorithm. The news feed, however, is the more prominent feature and what users see when they open the mobile app or log on.

For that reason, conservative organizations and publishers have relied on it to spread news and information. But that could be more challenging. In addition to releasing its news feed values, Facebook announced a change to the algorithm that places an even greater emphasis on content from friends and family.

“Facebook was built on the idea of connecting people with their friends and family,” the company says in the post. “That is still the driving principle of news feed today. Our top priority is keeping you connected to the people, places and things you want to be connected to—starting with the people you are friends with on Facebook.”

While this isn’t exactly a shocking revelation on the part of Facebook, it does clarify for publishers where they rank in the ecosystem. As the platform has grown to become a prominent destination for distributing news, Facebook has attempted to meet the demands of publishers while serving its users the content they want to see and share.

Our integrity depends on being inclusive of all perspectives and view points.

Facebook’s Adam Mosseri, vice president of product management for the news feed, said ranking stories plays an important role in each Facebook user’s experience. Without it, people wouldn’t engage with the content and leave the platform.

“When we launched news feed in 2006, it was hard to imagine the challenge we now face: far too much information for any one person to consume,” Mosseri writes in a post announcing the values. “In the decade since, more than a billion people have joined Facebook, and today they share a flood of stories every day. That’s why stories in news feed are ranked—so that people can see what they care about first, and don’t miss important stuff from their friends.”

So will you find your favorite conservative publication in Facebook’s news feed? The company says yes—with priority given to content that informs and entertains.

“People expect the stories in their feed to be meaningful to them—and we have learned over time that people value stories that they consider informative,” the company explains. “We’ve also found that people enjoy their feeds as a source of entertainment.”

Lars Backstrom, engineering director at Facebook, says changes to the news feed will be implemented in the coming weeks. So what can publishers do? Backstrom says to post content that people want to share.

“Overall, we anticipate that this update may cause reach and referral traffic to decline for some pages,” Backstrom explains. “The specific impact on your page’s distribution and other metrics may vary depending on the composition of your audience. For example, if a lot of your referral traffic is the result of people sharing your content and their friends liking and commenting on it, there will be less of an impact than if the majority of your traffic comes directly through page posts. We encourage pages to post things that their audience are likely to share with their friends.”

>>> Jim DeMint: Why I Met With Facebook’s Mark Zuckerberg

“We don’t favor specific kinds of sources—or ideas. Our aim is to deliver the types of stories we’ve gotten feedback that an individual person most wants to see,” the company says. “We do this not only because we believe it’s the right thing but also because it’s good for our business.”

But there’s also a limit to what Facebook will tolerate. The company’s community standards have created problems for conservatives in the past. Facebook, however, sees them as essential for creating a “safe” environment.

“We think it’s possible to be inclusive without making Facebook a place where people are subjected to attacks, hate, or other harmful behavior.”

The values suggest that “misleading, sensational, and spammy” content won’t be showing up in news feeds, and that it’s ultimately up to individual users to determine what shows up. Facebook has given its 1.6 billion monthly users the option to “unfollow,” “hide,” and “see first” the people and pages they want.