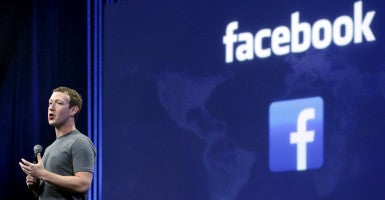 A new report suggests Facebook, where Mark Zuckerberg is chairman and CEO, has been censoring conservative news. (Photo: Robert Galbraith/Reuters/Newscom)

Maybe we need to start talking about the consequences of living in Mark Zuckerberg’s America.

It’s easy to see Facebook as the new town square. Friends, family, and acquaintances may live far apart, but on the Facebook news feed, the mixture of personal updates and news stories allow conversations and exchanges of viewpoints to continue, despite the distance gap.

Which makes it all the more concerning that a new report suggests Facebook—without being open about it—has been censoring conservative news.

Facebook workers routinely suppressed news stories of interest to conservative readers from the social network’s influential “trending” news section, according to a former journalist who worked on the project. This individual says that workers prevented stories about the right-wing CPAC gathering, Mitt Romney, Rand Paul, and other conservative topics from appearing in the highly influential section, even though they were organically trending among the site’s users.

On its site, Facebook doesn’t discuss censorship when explaining its news feed. “Trending shows you topics that have recently become popular on Facebook,” Facebook writes. “The topics you see are based on a number of factors including engagement, timeliness, Pages you’ve liked and your location.”

In an emailed response to The Daily Signal’s inquiry about the Gizmodo article, a Facebook spokesperson responded that the organization “take[s] allegations of bias very seriously” and that Facebook is “a platform for people and perspectives from across the political spectrum.”

“There are rigorous guidelines in place for the review team to ensure consistency and neutrality,” the spokesperson added. “These guidelines do not permit the suppression of political perspectives. Nor do they permit the prioritization of one viewpoint over another or one news outlet over another.”

The site’s enormous influence makes the possibility of censorship even more troubling. Sixty-one percent of millennials, 51 percent of Generation X-ers, and 39 percent of baby boomers “got news about politics and government in the previous week” from Facebook, according to a Pew Research Center poll in 2014. For millennials and Gen X-ers, Facebook is the most popular news source, beating out CNN, local TV, and Google News.

According to Gizmodo, citing a source who identifies as a conservative and worked for Facebook as a curator:

The Lois Lerner story is perhaps the most telling. Whether you’re conservative, liberal, or moderate, the fact that the IRS treated conservative groups differently from others should have been a huge red flag. Americans should be able to count on agencies like the IRS being ideologically impartial, holding themselves to a standard where they treat all Americans the same.

And while Lerner didn’t ultimately face criminal charges, conservatives were hardly ginning up some “fake” story. As CNN (very much a nonconservative news site) reported in October, “The IRS mishandled the processing of tax-exempt applications in a manner that disproportionately impacted applicants affiliated with the tea party and similar groups …”

It’s hard to imagine, say, the George W. Bush administration getting away with an “oops!” if liberal groups’ tax-exemption applications were treated differently.

Yet if Facebook curators, for whatever reason, decided Lerner didn’t merit being a top trending topic, moderate and liberal Americans are likely less familiar with the IRS scandal. And that could have long-term implications for what matters voters take seriously: It’s easy to shrug off something like the IRS treating conservatives differently, or Benghazi, if you’ve never read—or maybe even seen on Facebook’s trending news—an article detailing the facts about the case.

It’s no secret the left is trying to affect the news narrative. Obama foreign policy guru Ben Rhodes’ assistant, Ned Price, was shockingly frank about that, telling The New York Times in a magazine piece published last week just how he manipulates the media to get out the narrative he wants:

‘We have our compadres, I will reach out to a couple people, and you know I wouldn’t want to name them—’

‘I can name them,’ I said, ticking off a few names of prominent Washington reporters and columnists who often tweet in sync with White House messaging.

Price laughed. ‘I’ll say, “Hey, look, some people are spinning this narrative that this is a sign of American weakness,” ‘ he continued, ‘but—’

‘In fact it’s a sign of strength!’ I said, chuckling.

‘And I’ll give them some color,’ Price continued, ‘and the next thing I know, lots of these guys are in the dot-com publishing space, and have huge Twitter followings, and they’ll be putting this message out on their own.’

But if Facebook is censoring its news feeds, or at least favoring liberal or moderate news stories, it may not even ultimately be necessary for the left to shape the narrative, because Facebook will be helping by boosting articles that promote a certain viewpoint or perspective—and ignoring those that don’t.

In recent years, there has been a surge of conservative news startups (including, of course, The Daily Signal!), with those outlets often focusing on the news the mainstream media sidelines or completely ignores. Facebook could use its enormous reach to let its users decide what news matters, and reflect their decisions in its trends—and therefore encourage discussion on Facebook of the issues that the majority of people care about.

It’s unfortunate that, if Gizmodo’s source is correct, Facebook is instead secretly working behind the scenes to curtail Americans’ exposure to conservative news.