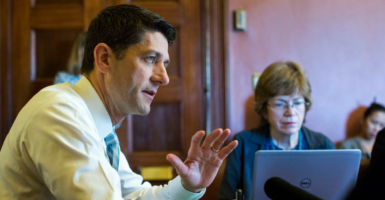 These reforms are a right step in the direction of curbing the executive branch’s overreach. (Photo: Al Drago/CQ Roll Call/Newscom)

A series of proposals released last week by House Republicans aim to get the branches of the federal government to respect limits the Constitution places upon them. “A Better Way: Our Vision for a Confident America” contains several regulatory reforms as well as proposals to curb executive power grabs by enhancing certain checks and balances.

It’s a laudable goal, but it certainly will be a Sisyphean task to bring the executive branch and its agencies to heel.

Speaker of the House Paul Ryan, R-Wis., characterized the challenge this way:

Just as the size of government has grown, so has its arrogance. Washington spends money it isn’t authorized to spend. It takes power it isn’t given. It ignores laws it is required to execute. It doesn’t listen, and it certainly doesn’t learn.

First, “A Better Way” proposes legislation that would expedite lawsuits brought by either or both chambers of Congress against the administration for failing to execute the law.

Though there have been many instances of courts refusing to hear cases brought by members of Congress against the president because the members lacked standing to sue, several of those suits simply amounted to disputes between members of Congress, rather than with the administration. Courts generally decline to entertain such “sore loser” suits.

Committees and the full House, however, have fared better in court. For example, in 2008, a D.C. district court judge ruled that a House committee had standing to seek enforcement of a subpoena issued to executive branch officials to testify before the committee about the firing of nine U.S. attorneys.

The court found the “loss of information to which [the committee] is entitled and the institutional diminution of its subpoena power” was “precisely the injury on which the standing of any government body rests when it seeks judicial enforcement of a subpoena it issued.”

Then last fall, another D.C. district court judge found that the House had standing to challenge the Obama administration’s expenditure of funds Congress never appropriated because “as an institutional plaintiff” the House could seek “to preserve its power of the purse and to maintain constitutional equilibrium between the executive and legislature.”

Under Ryan’s proposal, suits brought by either or both chambers would receive expedited review before a three-judge district court panel followed by a direct appeal to the Supreme Court. This would limit the Supreme Court’s ability to avoid hearing the case and also prevent an obstinate administration from delaying litigation until after that administration had ended.

>>> To Read the Full Report, “Who Will Regulate the Regulators? Administrative Agencies, the Separation of Powers, and Chevron Deference.”

A second proposal is aimed at reining in the hybrid “fourth branch” of government: federal agencies that function as quasi-independent executive, legislative, and judicial bodies.

An agency’s power to write, execute, and settle disputes involving regulations that have the force of law paired with little accountability is augmented by the courts’ tendency to defer to an agency’s interpretation of statutes it is charged with carrying out, known as Chevron deference.

Along with Auer/Seminole Rock deference, which applies to an agency’s interpretation of its own regulations, Chevron deference flips how our judiciary is supposed to function on its head. Last year, Justice Clarence Thomas described how courts abdicate their duty when they “refuse even to decide what the best interpretation is under the law” and instead defer to the agency.

Ryan’s proposal would require courts to independently review an agency’s action (when it is challenged in an appropriate case or controversy) rather than defer to the agency’s judgment, and this would provide much needed oversight. Hopefully this reform also would encourage members of Congress to write clearer statutes and refrain from delegating wide-ranging authority to agencies like the Environmental Protection Agency and Federal Communications Commission.

A third proposal found in “A Better Way” would strengthen the Anti-Deficiency Act, which makes it a crime for a federal employee to spend funds without congressional authorization. Currently, violations of the Anti-Deficiency Act are punishable by suspensions, fines, or imprisonment (although actual prosecutions are extremely rare).

Ryan proposes mandating employees who violate the act be fired—unless “the agency head personally intervenes.” This would force agency heads to assume responsibility for illegal expenditures. The proposal would also impose fines against the employee and agency “up to the amount illegally obligated.”

After all, the Constitution gives Congress, not the executive branch, the power of the purse: Article I, Section 9, Clause 7 of the Constitution states that “No Money shall be drawn from the Treasury, but in Consequence of Appropriations made by Law.” Unless Congress decides to appropriate the necessary funds for a program, the federal government has no business spending taxpayers’ dollars.

With these reforms, Ryan will attempt to renew the balance of powers that our founders established in the Constitution, reaffirming that the executive power is limited and duly enacted laws are not to be ignored.

These reforms are a right step in the direction of curbing the executive branch’s overreach and making the federal government more accountable to the American people.