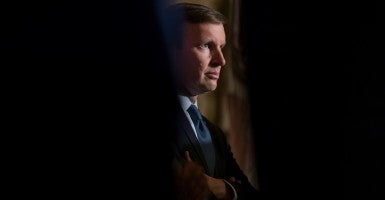 Sen. Chris Murphy, D-Conn., filibustered for more than 14 hours in an effort to force the Senate to take up gun control. (Photo By Tom Williams/CQ Roll Call)

Sen. Chris Murphy, D-Conn., seized control of the Senate floor Wednesday morning in an effort to force lawmakers to agree on legislation that would enforce a universal background check system and stop suspected terrorists from purchasing guns.

The Connecticut Democrat didn’t yield back the floor until just after 2 a.m. Thursday. He spoke for more than 14 hours straight.

Flanked by Sens. Richard Blumenthal, D-Conn., and Cory Booker, D-N.J., Murphy held up a routine spending bill to push the Senate to agree to both proposals.

“I’m going to remain on this floor until we get some signal, some sign that we can come together on these two measures,” Murphy said from the floor, “that we can get a path forward on addressing this epidemic in a meaningful, bipartisan way.”

The Murphy filibuster spearheaded a larger election year effort to shame Senate Republicans into conceding on the gun-control issue after an Islamist-inspired gunman murdered 49 people and wounded another 53 more at a gay nightclub in Orlando.

Earlier in the week, Senate Minority Leader Harry Reid, D-Nev., promised that Democrats would “force a vote” on an amendment sponsored by Sen. Dianne Feinstein, D-Calif., “to close the terrorist loophole.” The legislation would ban anyone on the government’s terrorist watch list from purchasing guns or explosives.

Before the Murphy filibuster began, Majority Leader Mitch McConnell, R-Ky., tried to rally support for the underlying appropriations bill, legislation he said would “provide the FBI with more of the support it needs to follow leads generated within our borders.”

Referring to the Islamic State terrorist army, also known as ISIS or ISIL, McConnell said in a floor speech Wednesday:

The terrorist attack in Orlando underlines the critical importance of this work, and it presents each of us with a choice. Do we want to make the tough choices to actually solve the problem and defeat ISIL, or do we want to use the Senate floor to make 30-second political ads?

“Congress cannot sit on the sidelines while killers freely buy weapons to brutally murder the people Congress is supposed to protect,” Chris Harris, a Murphy spokesman, said in a statement provided to The Daily Signal. He added that the senator “will remain on the floor demanding the Senate adopt these measures.”

The nature of domestic terrorist attacks against the U.S. frustrates law enforcement’s ability to respond, Murphy argued, because they are often uncoordinated and carried out by a single terrorist.

According to FBI Director James Comey, The New York Times reports, the Orlando terrorist had been placed on his agency’s terrorist watch list and was investigated in both 2013 and 2014. A subsequent investigation, however, did not yield enough evidence to warrant his arrest.

Because assault weapons are the “weapons of choice for those who want to do harm for political purposes,” Murphy said that anyone on the terrorist watch list must be prohibited from purchasing one.

The terrorist watch list, officially called the Terrorist Screening Database, is a consolidation of several lists, including the no-fly and selectee lists and the Known and Suspected Terrorist file.

Because of the way the database operates, Republicans argue, the Democrat proposal could infringe on Second Amendment rights and leave citizens without due process to protest their placement on the list.

For instance, Rep. Tom McClintock, R-Calif., was placed on the no-fly list after he was mistaken for an Irish Republican Army activist suspected of terrorist activity. The California conservative said in a December floor speech that it took months to rectify the mistake.

And Republicans say they’ve pointed out that they’ve proposed their own legislation to keep terrorists from gaining access to firearms.

“We shouldn’t forget that a person who feels compelled to commit a terrorist act will not be stopped by just being unable to legally purchase a firearm,” Sen. John Cornyn, R-Texas, said in a Tuesday floor speech. “And in the case of the Orlando attacker, it does not appear he was on a watch list at the time he purchased the weapons he used to carry out this horrific attack.”

Cornyn said he plans to reintroduce legislation that would allow investigators to detain someone on the terrorist watch list and stop their purchase of a gun.

Any policy change seems unlikely in light of past battles.

Earlier Democrat efforts to enact gun control after the mass murders in Sandy Hook, Connecticut, and  Roseburg, Oregon, failed to gain traction. And even if a measure passed out of the Senate, it would face an uphill battle out of the firmly Republican House.

The gun debate threatens to doom the underlying spending legislation in the Senate, the normally uncontroversial commerce, justice, and science appropriations bill.

Before Murphy’s filibuster, the White House already had warned that President Obama would veto the spending bill because of provisions governing antique firearms and restrictions on the transfer of detainees held at the Guantanamo Bay detention center.

Murphy withdrew from the Senate only after he heard news of an agreement between Republican and Democratic leadership.

“It is our understanding … that we have been given a commitment on a path forward to get votes on the floor of the Senate,” Murphy said in a statement, “on a measure to assure that those on the terrorist watch list do not get guns … and an amendment … to expand background checks to gun shows and Internet sales.”

This report has been modified to correct the number of persons killed in the Orlando massacre and the official name of the terrorist watch list.