One Year After He Was Nearly Killed, Scalise Is Still Receiving Assassination Threats 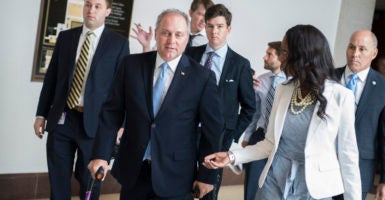 A man who promised to put some “lead” into House Minority Whip Steve Scalise was arrested and charged Thursday with interstate communication of a threat, The Daily Caller News Foundation has confirmed.

The man, 63-year-old Carlos Bayon, was charged by criminal complaint with interstate communication of a threat. Bayon left Scalise a message on June 30 claiming he would make the whip “pay,” promising to feed him and the people that sent him to Washington “lead.” The Daily Caller News Foundation learned Bayon left the message at one of Scalise’s district offices.

“Hey listen, this message is for you and the people that sent you there. You are taking ours, we are taking yours. Anytime, anywhere. We know where they are. We are not going to feed them sandwiches, we are going to feed them lead. Make no mistake, you will pay. Ojo por ojo, diente por diente [Spanish for ‘an eye for an eye, a tooth for a tooth’]. That is our law and we are the majority. Have a good day,” Bayon left on Scalise’s congressional answering machine.

“Whip Scalise is grateful to law enforcement for their actions. He will never forget how their heroism saved his life and those of his colleagues last year. As he has said before, there is absolutely no place in our political discourse for violent threats,” Lauren Fine, a spokeswoman for Scalise, told The Daily Caller News Foundation in response to the news that Bayon had been arrested.

Bayon’s threats are one in a series of threats against the lives and safety of Scalise, Republicans in Congress, and President Donald Trump. Celebrities have repeatedly called for violence against the president, even going so far as to feature his likeness decapitated or about to be assassinated.

Democratic Rep. Maxine Waters of California recently called for protesters to form mobs and harass members of the Trump administration, calling the statements troubling and the complete antithesis of American democracy.

“If you see anybody from that Cabinet in a restaurant, in a department store, at a gasoline station, you get out and you create a crowd and you push back on them, and you tell them they’re not welcome anymore, anywhere,” Waters said in June.

The comments from Waters calling for near mobs against White House officials came one year after a gunman shot Scalise. The gunman, 66-year-old James T. Hodgkinson, was targeting Republicans at a congressional baseball practice in Alexandria, Virginia, and was killed by Capitol Police.

Hodgkinson nearly killed Scalise on June 14, 2017. The bullet entered his body, shattering his hip and tearing up some internal organs. The whip has spent much of the past year in and out of surgery and in recovery. He returned to Congress in late September 2017.

The man who shot Scalise was an avid supporter of independent Sen. Bernie Sanders of Vermont and other liberal causes. He was a member of Facebook groups like “Terminate the Republican Party,” “Expose Republican Fraud” and “Donald Trump is not my president.”