We Should All Know the Name Henrietta Lacks 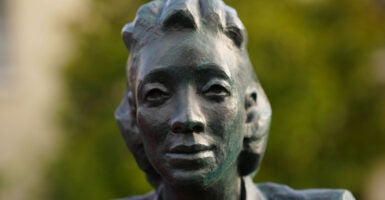 Henrietta Lacks, whose cells led to major medical progress, deserves much more recognition than she has received, and she deserved a better life than she was given. Pictured: A statue of Lacks unveiled on the 70th anniversary of her death at Royal Fort House in Bristol, England, pictured on Oct. 4. (Photo: Ben Birchall-PA Images/ Getty Images)

On a hot summer day, Aug. 1, 1920, a woman named Henrietta Lacks was born in Roanoke, Virginia. Though blessed with the gift of life, she was not blessed with the fruits of good fortune. At the tender age of 4, her mother died while giving birth to her 10th child. Not too long after, her father moved the family to Clover, Virginia, only to abandon them and leave her to her maternal grandfather.

During this very delicate period of her life, she tended to the family farm, located on a plantation owned by her great-grandparents; her living space was tucked neatly into the former quarters of slaves. In sixth grade she was forced to make the difficult decision to drop out of school to support her family. A short while later, at the age of only 14, she gave birth to her first child, and then at 18, her second. Compounding the misery, pain and suffering of her childhood, her beloved second child was diagnosed with epilepsy and cerebral palsy.

A bit of breathing room was accorded to Lacks. After drudging through her childhood, she would marry and give birth to three more children. But all good things must come to an end.

All of this would lead to a fateful day in November of 1950, where Lacks was diagnosed with an aggressive form of cervical cancer. Yet, unbeknownst to her, her cancer would inevitably seal her fate and her legacy. Doctors from her hospital would go on to collect tissue samples from her uterus only to discover that the immeasurable pain and suffering that Lacks endured would open the door to a new era of scientific research and advancements in medicine.

Cells will typically live for only a short period of time when placed outside the body. This short period of time is not nearly long enough to conduct studies on them. Not only that but they can only replicate themselves a finite number of times, meaning that, at a certain point, no more cells will be reproduced.

But Lacks’s cells were different. Her cells not only survived for long periods of time outside the body but they also replicated themselves every 24 hours. This natural breakthrough allowed scientists to be able to continually replicate and study real-life human cells outside the human body, something invaluable to the study of cells.

This convenience allowed scientists to develop some of the most widely recognized vaccines, such as the vaccines for Polio and COVID-19. Lacks’s cells have been used even more broadly to study the effects of radiation, makeup and even space on human cells.

That is right; her cells have been sent to space.

In sum, patents that used Lacks’s cells total nearly 11,000.  Most believe it to be a virtue to save the life of just one person, but imagine you could save billions. In fact, imagine your endeavors saved the lives of people who have not even been born yet, and will not be born for hundreds, and maybe even thousands, of years. Lacks unknowingly did just that. And what was she rewarded with for the medical advancements that her cells caused? An agonizing, premature death filled with immeasurable pain and suffering, and a memory that is slowly fading from the public’s mind.

Lacks deserves much more recognition than she has received, and she deserved a better life than she was given.

Her life story and legacy ought to be taught in schools; she should be posthumously awarded a Nobel Peace Prize; statues and plaques of her should be erected in hospitals and medical research centers everywhere. For if it were not for her, the many scientists who have won the Nobel Peace Prize, and many of the scientists who conduct research on her cells today, would not have the legacy that they have.

Of course, no award could possibly be created for someone of her stature. No living human has come close to saving the number of lives she has, nor anywhere near revolutionizing medicine, the products that we use and the world that we live in. Lacks has not only risen billions from the depths of suffering but she will continue to do so for decades, and possibly even centuries, to come.

Lacks’s gift-from-God legacy knows no bounds. She may be the only person that will ever be discovered to have immortal, fast-replicating cells. If that is the case, then even more a reason to treat her like the miracle she was, still is and will be.

For, in a thousand years, society may forget who she was, but even then, as is the case now, there is and always will be a little Henrietta Lacks in all of us.