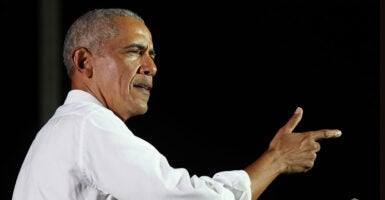 A couple of years ago, I gave a speech before a conservative, predominantly white audience. I couldn’t help but notice a tall, heavyset black man, arms folded, standing in the back. From time to time, I would look at him, only to see him frown and shake his head, I assumed disapprovingly, when I made what I considered important points.

After the speech, he came up to me. “I am angry,” he said. “Not at you—at myself. I thought I was well-informed. I read the news. I watch the news. I now see I’ve been manipulated by the party that I voted for all my life.”

He then ticked off some of the points I made in my speech that he said surprised or even shocked him.

He said he had no idea that (according to a 2004 Thomas B. Fordham Institute study) 44% of Philadelphia public school teachers send their own school-age kids to private school. Yet the Democratic Party adamantly opposes school vouchers, which would give K-12 children of urban parents a chance at a better school.

He did not know that Democrats, including President Barack Obama, tried to end the Washington, D.C., Opportunity Scholarship Program. It is a lottery that allows fortunate parents to opt out of their local public school for a better private school. The program is so popular that there are far more parents who want to participate than there are seats.

“What’s more important, ” he asked me, “than making sure are kids are well-educated?”

He said he was unaware that out of the approximately 390,000 slave owners in 1860, no more than a “handful” were Republican, according to conservative Dinesh D’Souza.

He said he was unaware that, before 1938, when the first federal minimum wage law was enacted, a black teenager was more likely to be employed than a white teenager.

The man did not know that, according to The Washington Post, in recent years, more unarmed whites have been killed by the police than unarmed blacks. He was unaware of studies, including one by a black Harvard economist, that found the police more hesitant, more reluctant, to pull the trigger on a black suspect than on a white suspect. He did not know that, according to the Centers for Disease Control and Prevention, police killings of blacks declined almost 80% from the late ’60s through the 2010s, while police killings of whites have flatlined.

He did not know that, about racism, then-Sen. Barack Obama said: “The previous generation, the Moses generation, pointed the way. They took us 90% of the way there. We still got that 10% in order to cross over to the other side.” This would be the same Obama who, when he became president, said: “The legacy of slavery, Jim Crow, discrimination in almost every institution of our lives—you know, that casts a long shadow. And that’s still part of our DNA that’s passed on. We’re not cured of it.”

According to MSNBC political analyst Steve Kornacki, 43,000 votes in just three states would have switched the winner from Joe Biden to Donald Trump. This means all Republicans need to do is change the minds of a small percentage of the electorate.

The man at my speech proves this is more than doable.