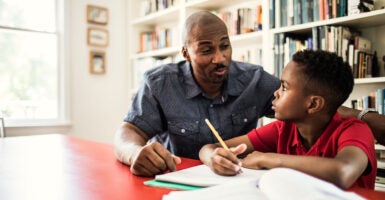 In Detroit, 73% of black students scored below basic in math and 56% in reading. There are similar trends in other major cities. (Photo: MoMo Productions/Getty Images)

You present to a physician with severe abdominal pain. He examines you and concludes that your ingrown toenails are the cause of your abdominal distress.

The point of this story is that your toenails can be treated until the cows come home, but if there is improper diagnosis, then you are still going to have your abdominal pain.

“Below basic” is the score a student receives when he is unable to demonstrate even partial mastery of knowledge and grade level skills. How much can racism explain this?

To do well in school, someone must make a kid do his homework, get a good night’s rest, have breakfast, and mind the teacher. If these basic family functions are not performed, it makes little difference how much money is put into education, the result will be disappointing.

In 2019, the racial breakdown of high school seniors who took the ACT college entrance exam and met its readiness benchmarks was 62% of Asians, 47% of whites, 23% of Hispanics, and 11% of blacks.

That helps explain a 2016 study by Georgetown University’s Center on Education and the Workforce, “African Americans: College Majors and Earnings.”

It found that black college students were highly concentrated in lower-paying and less academically demanding majors like administrative services and social work.

They are much less likely than other students to major in science, technology, engineering, and math, even though blacks in these fields earned as much as 50% more than blacks who earned a bachelor’s degree in art or psychology and social work.

Among all of the afflictions that disproportionately impact people of color, violence may be the worst. In 2018, blacks comprised 13% of the U.S. population but roughly 53% of the 16,000 murder victims.

In Baltimore, the 2019 clearance rate was 32%. In 2015, when Baltimore experienced the highest per-capita murder rate in its history, the average homicide suspect had been previously arrested more than nine times. When crimes remain unsolved, it gives criminals free range and black people are their primary victims.

By the way, most law enforcement occurs at the local level. The governments at these local levels are typically dominated by Democrats.

Thomas Sowell has argued, “The black family, which had survived centuries of slavery and discrimination, began rapidly disintegrating in the liberal welfare state that subsidized unwed pregnancy and changed welfare from an emergency rescue to a way of life.”

The bottom line is that while every vestige of racial discrimination has not been eliminated, today’s discrimination cannot go very far in explaining the problems faced by a large segment of the black community.