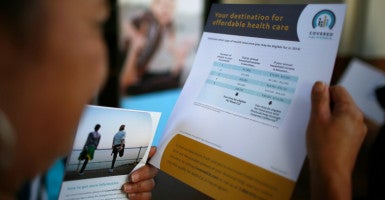 A bill sent to California Gov. Jerry Brown's desk would move the state one step closer to allowing illegal immigrants to purchase health insurance through Covered California, its Obamacare exchange. To do so, the state first needs permission from the federal government. (Photo: Lucy Nicholson /Reuters/Newscom)

California state lawmakers are one step closer to expanding coverage under Obamacare to illegal immigrants, sending a bill to Gov. Jerry Brown’s desk that would allow those living in the state illegally to buy health insurance on the exchange with their own money.

The California Legislature passed a bill last week setting in motion a process to eventually allow illegal immigrants living in the state to purchase private health insurance through its state-run exchange, Covered California.

Illegal immigrants cannot and would not qualify for federal subsidies available to lower-income Americans under Obamacare.

The bill requires the state to request permission from the federal government to waive a provision of the Affordable Care Act prohibiting illegal immigrants from participating in Obamacare’s exchanges.

If Brown, a Democrat, decides to sign the legislation and receives the government’s blessing, California would become the first state to offer health insurance to illegal immigrants through Obamacare.

Though the health care law prohibits illegal immigrants from participating in Obamacare’s exchanges, California officials can seek approval from the Department of Health and Human Services through a Section 1332 “State Innovation Waiver” to bypass that prohibition.

California’s bill instructs the state to pursue a State Innovation Waiver from the federal government. Section 1332 of the health care law allow states to request five-year waivers from key aspects of the Affordable Care Act, including the individual and employer mandates, beginning next year.

To attain a State Innovation Waiver, a state must “pursue innovative strategies” to provide residents with health insurance, according to the Centers for Medicare and Medicaid Services. The plan must not only ensure residents have access to “comprehensive and affordable” health care, but it also must provide coverage to either the same number of or more people covered under Obamacare.

Last, for the Section 1332 to be granted, the state’s strategy cannot add to the federal deficit.

The legislation, sponsored by state Sen. Ricardo Lara, a Democrat, was passed last week, and groups opposing illegal immigration are sounding off against the measure.

“With a legislature writing bills for people in our state illegally, this is incentive for the world to come to California illegally,” Robin Hvidston, executive director of the California grassroots group We the People Rising, told The Daily Signal. “California is in the United States of America, and our legislators should be focused on legislating for our U.S. citizens.”

Though illegal immigrants aren’t eligible for subsidies under Lara’s bill, Hvidston worries that in the future, more changes to the law will come.

“It is historically a progression in our state where the bill starts at a certain level, then increases the next year with a new benefit, and on and on,” she said.

Like Hvidston, the Federation for American Immigration Reform, or FAIR, too believes the legislation on Brown’s desk is simply a first step.

“This follows a pattern in California. [The bill] is kind of being framed innocuously as ‘We’re not going to subsidize illegal immigrants and just give them an opportunity to buy insurance through the exchanges,’” Ira Mehlman, a spokesman for FAIR, told The Daily Signal. “Of course, there are few who are going to be able to buy coverage without subsidies. This is the first step in the process.

“First, you make it possible for them to buy policies through the exchange, and when nobody can do that because it’s too expensive, you say we have to give them subsidies.”

Regardless of how California’s policy could progress in the future, groups in favor of the bill argue the state should be working to ensure all Californians have access to quality coverage.

“People who have different viewpoints on immigration policy can come together in recognition that it is everyone’s interest to connect as many Californians with coverage, and prevent the health and financial issues for not just uninsured families, but the community as a whole,” Anthony Wright, executive director of Health Access California, told the Washington Examiner.

The group did not return The Daily Signal’s request for comment.

California has the largest population of illegal immigrants—2.6 million—in the country. Covered California puts expected enrollment in private health insurance coverage through the exchange at 50,000 enrollees.

Other estimates place the number of illegal immigrants who would be able to head to the exchange at 390,000.

Lara proposed the legislation initially in 2014, and it recently earned a nod of support of Covered California board members.

According to the Los Angeles Times, the Democratic lawmaker is hoping the state sends the waiver to the Department of Health and Human Services for consideration while President Barack Obama is still in office.

If Brown signs the bill, the departments of Health and Human Services and Treasury can take up to 225 days to respond to the waiver.

Because the decision to determine if Lara’s bill qualifies for a Section 1332 waiver, which outlines specific provisions for proposals that pass muster, would ultimately fall to the federal government, Ed Haislmaier, a Heritage Foundation senior fellow in health policy studies, said it’s likely the legislation amounts to an “empty gesture,” in part because of the high cost of unsubsidized health care on the exchanges.

“I think it’s more symbolic than anything else because to the extent that people in the U.S. illegally are being treated, they’re either paying out of pocket, which some probably are, or they’re relying on charitable and publicly funded providers such as hospitals and federally qualified health centers to obtain their care,” he said.

“Given that the government is having difficulty getting legal, U.S. citizens in the same demographic to actually buy insurance even though it’s heavily subsidized, I don’t know how much success they’ll have,” Haislmaier continued.

However, Mehlman with FAIR, said the Obama administration’s actions regarding illegal immigration indicate they would be in favor of granting the waiver.

“Given the inclinations of this administration and the policies they’ve carried out over the past seven and a half years, you have to suspect they would really want to do this,” he said. “Whether they will do it, I don’t know. I suspect that if the opportunity presented itself and they thought it wouldn’t harm them and their party politically, they probably would do it.”

During a speech before a joint session of Congress in 2009, Obama attempted to debunk claims that under Obamacare, illegal immigrants would receive health insurance, which prompted a now-infamous “You lie,” from Rep. Joe Wilson, R-S.C.

“There are also those who claim that our reform efforts would insure illegal immigrants,” he told lawmakers. “This, too, is false. The reforms that I’m proposing would not apply to those who are here illegally.”

Though California is the only state to consider a proposal expanding coverage to illegal immigrants under Obamacare, Colorado residents are considering a proposal that would require state officials to attain a Section 1332 waiver.

The proposal, which Colorado residents will vote on on the November ballot, would create a government-run health care plan in the Centennial State called ColoradoCare.