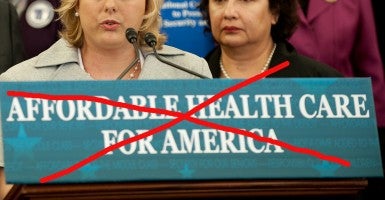 California’s beleaguered Obamacare exchange is once again in the crosshairs of a state senator who is demanding answers following reports that millions in contracts never went out to bid and instead were awarded to friends of the agency’s director.

Sen. Ted Gaines, who also is the GOP candidate for state insurance commissioner on the November ballot, fired off a letter to Covered California Director Peter Lee, asking how the agency “fulfills the public trust when it comes to spending taxpayer dollars.”

This latest calamity of nearly $4.4 million in non-bid contracts comes on the heels of a $1.37 million infomercial showing exercise guru Richard Simmons writhing on the floor to promote signups for Covered California in January. Gaines asked for justification of the spending, but when he received what he called a “lackluster” response, he sued for access to records two months later.

The Associated Press released the findings of its investigation over the weekend, reporting that nearly a fifth of the dollars were spent without bids, according to released data covering the time period 2010 through July.

A total of $4.2 million went to a consulting firm, the Tori Group, whose director, Leesa Tori, worked under Lee at Pacific Health Advantage, a now-defunct insurance exchange business.

In his letter to Lee, Gaines called this news “part of a pattern of irresponsible spending” that “are at the very least unseemly and reek of the kind of cronyism that all public servants should be interested in eliminating. Even the appearance of well-connected consultants and personal friends of decision makers getting bid-free contracts should not be tolerated.”

Tori Richards is a reporter for Watchdog.org, a national network of investigative reporters covering waste, fraud and abuse in government. Watchdog.org is a project of the nonprofit Franklin Center for Government & Public Integrity.