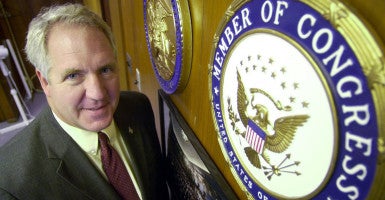 Make that 42, not 43, Republicans who voted with Democrats for the controversial LGBT amendment in the House of Representatives.

“My position on this issue has not and will not change,” says Rep. John Shimkus.

When the amendment passed late Wednesday night, 223-195, Rep. John Shimkus, R-Ill., voted for the measure but only by accident. The next day, Shimkus entered a statement into the congressional record to clarify his gaffe.

“My position on this issue has not and will not change,” Shimkus said in a press release. “I’ve consistently defended religious liberty and I always will. During a series of 14 votes on the House floor, I accidentally cast a ‘yea’ vote for the Maloney amendment when I intended to vote ‘nay.’”

Though the veteran Illinois representative did not cast the deciding vote and while the underlying bill with the LGBT amendment attached ultimately failed, Shimkus added that he “regrets the mistake.”

The apparent blunder comes during the middle of an unforeseen and controversial battle that threatens to derail the entire appropriations process.

Shimkus is not the first representative in Congress to unknowingly cast the wrong vote. The House of Representatives records votes using an electronic system first introduced in 1973. Small and narrow voting buttons allow a member to vote yea, nay, or present.

Supporters describe the amendment—introduced by Rep. Sean Patrick Maloney, D-N.Y.—as an effort to prohibit federal contractors from discrimination against members of the LGBT community on the basis of sexual orientation and gender identity. Opponents characterize the measure as a violation of conscience rights.

An intentional vote for the Maloney amendment would mark a significant shift for Shimkus. The Illinois representative voted against the amendment when it was first introduced to a separate appropriations bill.