Remembering the Benefits of Trade 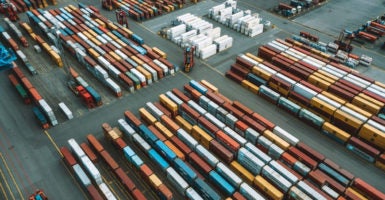 International trade flows have declined precipitously in the midst of this pandemic. They will be rebuilt, however, although perhaps in new configurations. (Photo: golero/Getty Images)

International trade benefits and enhances the lives of Americans every day. In these uncertain times, it is more important than ever to reiterate the importance of trade to America.

In that context, President Donald Trump has proclaimed May 17-23 World Trade Week. The president encourages “Americans to observe this week with events, trade shows, and educational programs that celebrate the benefits of global trade to our country.”

Celebrations from New York to Los Angeles to Miami are intended to remind Americans of the many ways that trade has improved their standards of living. It is easy for Americans to forget how trade has made possible the wide variety of goods available to them.

As World Trade Week New York City notes, the many events also emphasize “the contribution of international trade to economic growth and job creation” in the New York area and across the country.

And it’s not just in the big coastal port cities that these benefits are being highlighted. Although the Michigan World Trade Week has been canceled this year due to COVID-19, that annual event stresses “the link between international trade and Michigan’s economic well-being … and recognizes the contributions of international trade to job creation in Michigan.”

Similar stories are being recalled elsewhere in the heartland.  “About 1 million jobs in the Texas economy are dependent on international trade,” state Rep. Rafael Anchia, D-Dallas, the chairman of the Texas House Committee on International Relations and Economic Development, told The Texas Tribune.

In Oregon, Celebrate Trade “recognizes the significant contributions that Oregon’s trade-sector companies make to the Northwest’s economic vitality and quality of life.”

Trade is also in important component of The Heritage Foundation’s annual Index of Economic Freedom, now in its 26th year, which measures economic freedom in 180 countries around the world. The 2020 index’s Special Focus Section on Trade was highlighted at a recent event.

International trade flows have declined precipitously in the midst of this pandemic. They will be rebuilt, however, although perhaps in new configurations. Whatever form it takes in the future, though, trade will continue to be an important contributor to the well-being of all Americans.