How Texas Is Fighting Chinese Infiltration 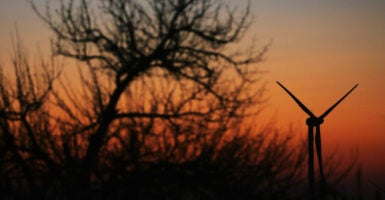 “With China, it's like having someone who is constantly talking about robbing you, and they have a history of breaking and entering, but now you’ve decided to hire them to install locks, ” Heritage Foundation visiting fellow Michael Cunningham says. Pictured: A Chinese wind turbine at sunset at Guanting Reservoir on Dec. 13, 2007, in Beijing. (Photo by Feng Li/Getty Images)

A Texas law blocking construction of a Chinese-owned wind farm close to an Air Force base could ripple across state lines to inspire new laws deterring China from burrowing into American infrastructure.

The Lone Star Infrastructure Protection Act—which became law in June 2021—prohibits companies and other entities from entering into agreements in Texas involving critical infrastructure if they are “owned or controlled” by governments or citizens of China, Russia, North Korea, and Iran.

“These nations must be banned from connecting into our critical infrastructure due to their rampant human rights abuses, illegal intelligence gathering, intellectual property theft, critical infrastructure attacks, and cyber system attacks,” Texas state Rep. Tan Parker, a Republican who first introduced the legislation, told The Daily Signal in a phone interview.

Chinese companies, usually connected to China’s government and Communist Party, have attempted to infiltrate U.S. infrastructure outside Texas as well.

Parker spoke about the law he sponsored at the annual meeting of the American Legislative Exchange Council, held in July in Atlanta. ALEC, a nonprofit group of conservative state lawmakers, officially adopted his bill as model legislation for other states during the meeting.

>>> Related: Why China Owning US Land Is Bigger Deal Than You Might Think

His successful legislation also authorizes the Texas governor to designate a country as a threat to critical infrastructure in consultation with the state’s Department of Public Safety and with federal homeland security officials.

“My prediction is more states will follow Texas and pass their own version of the Lonestar Infrastructure Protection Act,” Parker told The Daily Signal.

‘What We Want to Stop’

The legislation in Texas was a response to Houston-based GH America Energy, a subsidiary of China’s Xinjiang Guanghui Industry Investment Group Co. Ltd.

In 2016, the Chinese company purchased about 140,000 acres in Val Verde County, Texas. About 15,000 acres was carved out for the purpose of building a wind farm that would be known as the Blue Hills Wind Development.

Sun Guangxin, a billionaire businessman in China, founded the parent company, which is based in Xinjiang. He is a member of the Chinese Communist Party and a former officer in the China’s People’s Liberation Army.

If constructed, the Chinese-backed wind farm to produce energy would have occupied land about 200 miles west of San Antonio and a few dozen miles from the U.S.-Mexico border, where Laughlin Air Force Base operates in Del Rio, Texas.

“The wind farm would have featured wind turbines between 400 and 700 feet tall, less than 70 miles away from the Air Force base, so I viewed this as a significant risk to our national security,” Parker told The Daily Signal.

“This is a prime example of what we want to stop from happening,” the Texas lawmaker said. “There’s not even any wind that blows in that part of the state, for heaven’s sake, but they were still going forward with the project.”

The Daily Signal sought comment from GH America Energy on the Texas legislation and its proposed wind project. A spokesperson acknowledged the inquiry, but the company had not responded by several weeks later.

‘History of Breaking and Entering’

Michael Cunningham, a visiting fellow in The Heritage Foundation’s Asian Studies Center, said he would like to see more states pass laws to keep infrastructure out of the hands of Chinese companies. (The Daily Signal is Heritage’s multimedia news organization.)

“I think the federal government in just the past few years has started to recognize the risks posed by China and by Chinese infiltration,” Cunningham told The Daily Signal. “But I also see Chinese infiltration at the state level, and this is done to influence policy and to find a backdoor into America’s political system when no one is watching.”

Cunningham is the author of a Heritage report, released July 27, about what state and local governments can do to confront Chinese government efforts to infiltrate local political systems.

“With China, it’s like having someone who is constantly talking about robbing you, and they have a history of breaking and entering,” Cunningham said. “But now you’ve decided to hire them to install locks.”

State officials typically are “too reactive” in their approach to potential foreign assaults on U.S. infrastructure, he said.

Cunningham cites a case in 2019 when city officials in Miami stepped in to prevent Chinese companies from exercising control over a monorail system. The city acted in the absence of state action, he explained.

At the federal level, Cunningham pointed out, the Committee on Foreign Investments in the United States gave its approval to the Blue Hills Wind Farm in Texas, despite the project’s connections to China. The committee is a panel representing federal agencies that examines the impact of foreign investments in the U.S.

“The committee gave the impression that they weren’t really worried about the wind farm, even though it’s close to a U.S. Air Force base,” Cunningham said in a phone interview. “But in true Texas fashion, Texas said, ‘Not on my watch.’”

Spokespersons for the foreign investments committee did not respond to The Daily Signal’s requests for comment on why it approved the project over the opposition of Texas lawmakers.

Parker, the Texas state lawmaker, said more Americans should become familiar with the implications of Article 7 of China’s 2017 National Intelligence Law, which directs all Chinese citizens and organizations to support and assist China’s national intelligence network.

“This just makes it all the more clear why we have to protect America’s infrastructure and American interests,” Parker said. “I’ve always been a believer in free trade, but I believe in free and fair trade.”

Karla Jones, ALEC’s senior director of federalism and international relations, told The Daily Signal in an email that federal and state action is needed to close off potential points of vulnerability that could be exploited by China or other foreign actors.

“While safeguarding access to sensitive information and monitoring opportunities for foreign influence at the federal level is vital, considerable damage can be done through state and local entities where awareness of national security implications is less developed,” Jones said.

“Strategic adversaries often exploit this vulnerability in our national security ecosystem, which is what this model policy attempts to address,” she said.