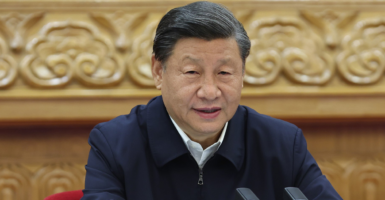 "We have heard the president of China, President Xi [Jinping], state several times that their goal is to create a 'community of common destiny for mankind.' That is to remake the world in their image," Rep. Dan Newhouse, R-Wash., warns. (Photo: Yao Dawei/Xinhua/Getty Images)

A senator from Alabama is sounding the alarm that the Chinese Communist Party is trying to overtake the United States not only militarily, but also economically, as Beijing continues to purchase U.S. land.

“The problem is … they’re just not trying to take us over militarily. They’re trying to also get real, real involved economically in our country,” Sen. Tommy Tuberville, R-Ala., said in an interview Tuesday with The Daily Signal. “Over the last decade, China has increased the amount of farmland purchases by about an astronomical amount.”

Tuberville, who recently introduced the “Securing America’s Land from Foreign Interference Act” with Sen. Tom Cotton, R-Ark., called for an end to China’s ability to purchase U.S. land because it poses a national security threat.

Recently, the Chinese company Fufeng Group purchased farmland just 12 miles from the Grand Forks Air Force Base in North Dakota. Tuberville, who labeled China as the top adversary of the U.S., expressed concern over that purchase, as well as about the Chinese government “getting involved in financial institutions and some of our manufacturing, where we know that they steal as much intellectual property as they possibly can.”

The first-term senator stressed that the U.S. is constantly working to prevent the communist country from accessing U.S. military and scientific research.

“It’s important that we start closing the door on that because … we spend billions of dollars on research and development, and millions of taxpayer dollars, by the way, in some instances, and [the Chinese] don’t have to do that,” Tuberville said.

They just steal the intellectual property and start manufacturing. It puts us at a huge disadvantage.

We’re a country of innovation, and we want to continue that. It’s just unfortunate what we have to do to protect our innovation and growth.

In regard to the North Dakota land purchase, Republican Sens. Kevin Cramer and John Hoeven, both of North Dakota, and Marco Rubio of Florida sent letters last month to Treasury Secretary Janet Yellen and Defense Secretary Lloyd Austin sounding the alarm on the Fufeng Group.

The letters called on the Committee on Foreign Investment in the United States, or CFIUS, to “conduct a review of Chinese food manufacturer Fufeng Group’s recent purchase of roughly 370 acres of land near Grand Forks, North Dakota.

“What CFIUS has authority over, of course, as in its name, is investments or transactions that involve investments in the United States by foreign entities,” Cramer explained to the Daily Signal.

I personally believe that should be changed. I think the purchasing of [U.S.] farmland and supply chain, you know, food-supply chain entities in the United States … needs that same kind of protection and oversight.

The president of Fufeng, Li Xuechun, is an active member and supporter of the Chinese Communist Party who has been recognized by the party as a “model laborer,” according to Cramer.

“By law, Chinese businesses are required to bow to the demands of the Chinese Communist Party – a regime that hates us and wants to overtake the United States at every opportunity. We shouldn’t treat this as a regular real estate deal,” Rubio told The Daily Signal in a statement.

When these Chinese businesses start buying American land near military installations, we need to ask why. CFIUS must conduct a full review of these purchases immediately.

In the same vein, a National Association of Realtors report last month listed China as the third-largest foreign buyer of U.S. land, behind Canada and Mexico, spending $6.1 billion in the past year. China accounted for 2% of the foreign purchases in Florida last year, down from 5% in 2018, according to a similar report from the National Association of Realtors that was conducted on behalf of Florida Realtors.

“I think the problem is, these companies have ties to the [Chinese Communist Party], and it’s not always apparent on the face of whatever a company is doing. But, I think it’s a huge problem,” Florida Gov. Ron DeSantis, a Republican, told Fox News’ Laura Ingraham in July.

DeSantis also explained that his state has sought to counter the influence of China by banning Confucius Institutes, “cultural centers” that operate on college campuses and are funded by Beijing.

“We’re also probably going to do legislation next legislative session about our pension investments with things that may be linked to the [Chinese Communist Party]. We don’t necessarily have a lot of it,” DeSantis said, “but we want to make sure we are cutting ties so that we’re not funding our No. 1 adversary.”

Rep. Dan Newhouse, R-Wash., is another lawmaker working to prevent future land purchases by communist China. Last year, Newhouse introduced an amendment that would “prohibit the purchase of farmland by the People’s Republic of China, the communist party or companies associated with the communist party.”

“The reason for that is, that over the last 10 years, we’ve seen the [People’s Republic of China] literally invest trillions of dollars around the world,” he said, citing Central and South America, the Middle East, the Indo-Pacific region, and Africa as examples.

Newhouse, who introduced a similar bill in May, explained that a report from the Economic Research Service, which is part of the Department of Agriculture, revealed that Chinese assets in the U.S. “have gone up by a factor of 10 over the last decade,” adding:

Why that’s important, and people need to fully appreciate this, that having a country like China with a determined goal to increase their control of the United States food production [is] not only an issue of food security for us, but I think this is a huge national security issue, as well.

China’s arable land is shrinking due to rapid urbanization, industrial growth, and natural disasters as well as both soil and water pollution, according to a May report from the U.S.-China Economics and Security Review Commission, or UCESRC. The Asian communist giant has 294 million acres of arable land to support its 1.4 billion people, compared with the United States, which has more than 375 million acres of arable land and nearly 330 million people, according to that report.

The report also explained that to combat its concern for land and food scarcity, China has sought to reduce its reliance on imports of items such as soybeans and corn, improve and conserve its domestic farmland, and adopt a more industrial approach to farming. China, which owns less than 1% of U.S. land held by foreign countries, has also turned its attention to investments in the United States on items such as seeds and livestock, as well as infrastructure and land.

In owning these assets in both the United States and within China, Chinese agricultural producers diversify supply and mitigate risks from events like natural disasters. Consolidating some of its production lines within the United States—for instance, with pork—also helps expedite the production process from farm to table.

We have heard the president of China, President Xi [Jinping], state several times that their goal is to create a “community of common destiny for mankind.”

That is to remake the world in their image. And what’s happening around the globe, what I described, is what’s known as the Belt and Road Initiative that China has undertaken.

The Belt and Road Initiative, which Xi unveiled nearly 10 years ago in 2013, is aimed at “[spending] or [investing] over $1 trillion on new infrastructure and connectivity investments across the Indo-Pacific and Eurasian supercontinent,” according to a Heritage Foundation report.

“As I said, it’s a food security and a national security issue, because if we can’t feed our own citizens, and I think that’s part of the reason China is doing this … . They have a huge population, and they need food,” Newhouse said. “And if we can’t be a country that can control and feed our own population, that is a huge national security risk. We would be at the mercy of foreign countries, and in this case, a foreign country that is not our ally.”

“At the height of the Wuhan coronavirus pandemic, Smithfield made sure China got the pork it needed—while American grocery stores ran short,” the Arkansas senator wrote. “By taking our land and food-processing companies for themselves, Chinese communists benefit their own people and gain leverage over the United States in one fell swoop.”

Smithfield Foods, based in Smithfield, Virginia, the largest pork processor and hog producer in the world, was sold to Chinese billionaire Wan Long in 2013.