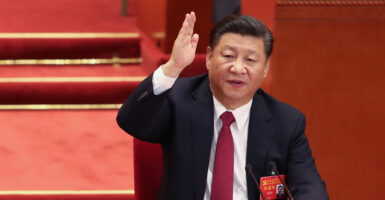 Bi-khim Hsiao, Taiwan's ambassador to the United States, told congressional Republicans that Taiwan wants to enhance and deepen cooperation with the U.S. as China’s aggression grows. Pictured: Chinese President Xi Jinping votes at the close of the 19th Communist Party Congress at the Great Hall of the People on Oct. 24, 2017, in Beijing. (Photo: Lintao Zhang/Getty Images)

Taiwan’s ambassador to the U.S., during a roundtable discussion Wednesday with House Republican leaders, said she is confident America would assist the island if it were attacked by China.

“We take the United States’ commitments to Taiwan seriously, and these commitments have been made over the past many decades through the Taiwan Relations Act and also the six assurances in helping Taiwan with our self-defense,” Ambassador Bi-khim Hsiao said during the event at the U.S. Capitol.

The six assurances state that the U.S. would not “set a date for termination of arms sales to Taiwan,” change any terms of the act, consult with China before selling arms to Taiwan, intervene between Taiwan and China or “alter its position about the sovereignty of Taiwan,” nor “pressure Taiwan to enter into negotiations with China” and formally recognize China’s control over Taiwan.

Hsiao emphasized Taiwan’s need to enhance and deepen cooperation with the United States as China’s aggression grows. Since the beginning of this year, China has conducted 555 sorties over Taiwan, using 398 combat aircraft such as bombers, fighter jets, and attack helicopters, Business Insider reported.

“Of course, the threat that we are facing is increasing and therefore we certainly need to also enhance our cooperation on many fronts, and we hope to continue to deepen that cooperation,” Taiwan’s ambassador said.

House Minority Leader Kevin McCarthy, R-Calif., who hosted the roundtable with members of House Republicans’ China Task Force, stressed the need for Congress to support Taiwan through measures such as increasing arm sales and providing the necessary weaponry to deter the Chinese Communist Party, or CCP.

In his remarks, McCarthy said:

I believe we should consider solutions such as increasing arms sales to Taiwan, sending Taiwan the right weapons to deter the CCP, allowing Taiwan to participate in training exercise like the RIMPAC [Rim of the Pacific], allowing Taiwan to display their symbols of national sovereignty in the United States, increasing commercial and trade lines, modernizing our own defense industry base to maintain our unmatched military capability.

Rep. Michael McCaul, R-Texas, who chairs the China Task Force, said the United States is concerned about Taiwan since Chinese President Xi Jinping has threatened violence against anyone who would intervene in China-Taiwan relations.

McCaul quoted Xi as saying in a meeting with Russian President Vladimir Putin during the Beijing Olympics: “Taiwan’s independence is a dead end … attempts to cause division in China will end in crushed bodies and shattered bones,” and “supporting Taiwan is playing with fire and whoever plays with fire will get burnt.”

I would like to also mention, when it comes to arms sales, as the leader [McCarthy] mentioned, we need to do everything we can to arm Taiwan now and not make the same mistake we made in Ukraine and wait until after an invasion. We need to arm Taiwan right now.

I signed off on foreign military sales three years ago that have yet to be delivered to Taiwan, and I’m urging the administration to get these weapons to Taiwan where they desperately need them to defend themselves.

Rep. Mark Green, R-Tenn., called on members of Congress to support Taiwan’s sovereignty. He stressed the importance of the island as a “close security ally” and “top trading partner” in addition to being “our tenth-largest export market and the seventh-largest source of imports.”

“Unfortunately, in the aftermath of Putin’s invasion of Ukraine, Communist China has ramped up its threats against Taiwan,” Green said. “As members of Congress, we must take action to deter China and to affirm Taiwan’s right to exist.”

Green discussed the most recent National Defense Authorization Act, which envisions more cooperation between the U.S. and Taiwanese militaries and joint exercises:

For instance, the House-passed FY 2023 NDAA calls for more U.S.-Taiwanese military cooperation such as and including work with the naval forces in the [Rim of the Pacific], or RIMPAC, exercises and prioritizing additional joint military exercises.

It also calls upon the United States government to continue, support, and develop capable, ready, and modern defense forces.

“Since 2017, countries like Panama, the Dominican Republic, El Salvador, and Nicaragua have all cut ties with Taiwan as a result of China’s bullying,” the Tennessee Republican said. “As both a member of the Armed Services Committee and a member of the Foreign Affairs Committee, I find China’s malign activities in our hemisphere deeply concerning.”

“Nothing less, as the leader said, nothing less than our national security is at stake.”

House Speaker Nancy Pelosi reportedly will visit Taipei next month with a delegation, sparking a hostile backlash from China, which threatened “forceful measures” in response.

“[China] will have to take determined and forceful measures to firmly safeguard national sovereignty and territorial integrity” if the trip proceeds, Foreign Ministry spokesman Zhao Lijian said, according to the Financial Times.

Pelosi’s office did not immediately respond to a request for comment by The Daily Signal.