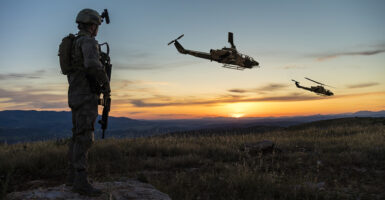 Only one bill in Congress reliably makes it into law every year: the National Defense Authorization Act, or NDAA.

The NDAA has passed for 62 years in a row, making it the extreme rarity among bills. It is meant to authorize the funding and provide key policy provisions for our country’s national defense.

However, this week, many in the U.S. House of Representatives are proposing amendments that push everything from climate change to radical diversity initiatives and budget cuts that could end up crippling our national security.

Because the bill reliably passes every year, lawmakers annually endeavor to get whatever issue they are passionate about added to the bill in the hopes of it becoming law. This week, the House is going to consider its version of the legislation, which means all 435 lawmakers had a chance to submit amendments to the bill—over 1,200 in all.

You can always find a wide variety of issues submitted as amendments to the NDAA, even those that have absolutely nothing to do with national defense. Perhaps this year’s winner in that category is House Amendment 746, submitted by Rep. Salud Carbajal, D-Calif., which would require that only domestically grown cut flowers may be displayed by the president and the departments of State and Defense.

But being irrelevant to national defense isn’t the worst offense of some of these amendments. Some would actually cripple our armed forces.

Amendment 166, sponsored by Reps. Barbara Lee, D-Calif., and Mark Pocan, D-Wis., would do great harm to our national defense by arbitrarily slicing $100 billion from the fiscal year 2023 defense budget without suggesting where these cuts could be made and without offering any supporting rationale.

The Heritage Foundation’s Budget Blueprint makes numerous recommendations where the Department of Defense could save billions, but this amendment simply chops the money from the Pentagon.

The committee approved that addition by a nearly unanimous (57-1) vote, correctly noting that security threats to the United States have rarely been higher with Russian President Vladimir Putin invading Ukraine and Beijing threatening its neighbors like Taiwan on a constant basis.

Still other amendments seek to strip out elements of our nuclear deterrent to placate progressive anti-nuclear weapons advocates, even though such actions would leave us less safe.

Amendment 542 by Reps. John Garamendi, D-Calif., and Pramila Jayapal, D-Wash., proposes to strip out funding for replacing America’s aging Minuteman III missile, which is in desperate need of replacement, having been fielded in the 1960s.

Similarly, Amendment 782 from Garamendi and Rep. Don Beyer, D-Va., would limit the funding available for the nuclear Sea-Launched Cruise Missile, a system that senior military officials have repeatedly testified is essential for our security.

In addition, some of the amendments serve merely to advance the woke agenda of progressives.

Amendment 306 by Jayapal would establish an Office of Climate Resilience within the White House. Amendment 40 by Garamendi and Jayapal would force an unfunded mandate on the Pentagon to buy electric or zero-emission nontactical vehicles. Amendment 84 by Rep. Bill Keating, D-Mass., would force U.S. embassies worldwide to hire “Climate Change Officers.” And finally, Amendment 864 from Rep. Joaquin Castro, D-Texas, would force any Pentagon entertainment-oriented contracts to be reviewed to ensure they fully consider “diversity.”

Further, Amendment 315 would eliminate the much-needed Asset and Infrastructure Review Commission at the Department of Veterans Affairs, which could have served to reduce the redundant and costly infrastructure that eats into the critical resources that could be applied to veterans care.

These are by no means all the amendments that would do harm or mischief to our national defense or, at best, divert precious resources to trivial matters. There have been over 1,200 amendments proposed to the NDAA in the House this year, and among them are some hidden pearls as well.

There’s Amendment 341, led by Rep. Beth Van Duyne, R-Texas, which would create flexibility for the Pentagon as to how it manages operations and maintenance funds, an idea that has been discussed many times and is even more relevant now at a time of high inflation.

Amendment 580 from Reps. Scott Franklin, R-Fla., and Bill Posey, R-Fla., would increase funding to allow more rare earth minerals to be placed in our National Defense Stockpile. Rare earths are minerals that are critical to our defense industrial base.

Amendment 823, a bipartisan initiative from House Armed Services Committee Chairman Adam Smith, D-Wash., and Ranking Member Mike Rogers, R-Ala., would establish a revolving fund to help replenish critical munitions that have been depleted because of the United States’ support to Ukraine. It’s a way to help ensure that production lines for munitions don’t go “cold,” a problem the U.S. is facing with Stinger missiles.

Amendment 853 from Rep. Dan Bishop, R-N.C., and large group of Republican members would prohibit the Armed Forces from promoting critical race theory, a concept antithetical to the success of the military.

Along those lines, a helpful amendment, Amendment 327 by Rep. Chip Roy, R-Texas, and others would eliminate the position of chief diversity officer at the Pentagon, a job that contributes nothing to military readiness.

With all of these amendments and hundreds more up for consideration, plus a looming deadline, the NDAA process in the House this year is nothing less than a sprint.

On Tuesday, the House Rules Committee meets to decide which of the 1,224 amendments will get a vote. The number that will be ruled “in order” is less than half. Then on Wednesday, the House will likely proceed immediately to vote on them. It’s a process that almost guarantees most members of Congress will not be able to fully read these amendments.

Thankfully, after the bill passes the House, it will be reconciled with its Senate counterpart to be deconflicted in a more thoughtful and deliberate manner.

For the sake of our national security, it’s critical that Congress get this legislation right.