Military Readiness Takes Back Seat to Wokeness at the Pentagon 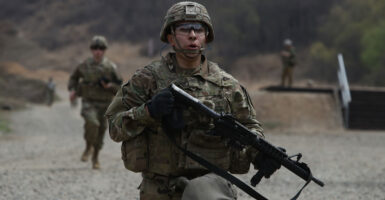 Earlier this year, the Army chose to abandon its gender-neutral combat fitness test that it had spent over a decade preparing over concerns that the test did not produce equitable results between men and women. Pictured: U.S. soldiers from the 2nd Infantry Division take part in the Best Warrior Competition on April 16, 2019, in Pocheon, South Korea. The competition includes disciplines such as the Army Combat Fitness Test and land navigation. (Photo: Chung Sung-Jun/Getty Images)

Military readiness appears to have suffered yet another setback in the name of “equity.”

Earlier this month, responding to a Virginia lawsuit, the Department of Defense amended its existing policy on service by personnel diagnosed with the human immunodeficiency virus.

Under previous policy, military personnel who were diagnosed with HIV were barred from military deployments and other combat zones.

The justification for such a policy is sound. HIV, a virus often transmitted through contact with blood, has potential to spread in a combat zone where the shedding and sharing of blood is common.

However, the plaintiffs in the Virginia lawsuit argued that such a policy was archaic, unnecessarily discriminatory, and not fit for the modern age given modern medicines and advancements.

This is the justification that the Defense Department used when it amended its policy, explaining that personnel who have tested positive for HIV now will not be barred from deployment so long as they are asymptomatic and possess a clinically confirmed undetectable viral load.

While these effects can be achieved by some modern HIV medications, concern remains that on a battlefield these medicines may be difficult, if not impossible, to access, which could potentially place the HIV-positive individual at risk, as well as others.

This is not the first time the Biden administration has amended its military policies in the name of greater inclusion.

Earlier this year, the Army chose to abandon its gender-neutral combat fitness test that it had spent over a decade preparing over concerns that the test did not produce equitable results between men and women.

Along with discarding the test, the Army also weakened the test standards, allowing soldiers four more minutes to complete the 2-mile run and pass. Now a soldier can complete 2 miles in 22 minutes and still pass.

These changes are part of a larger trend.

In 2021, the Air Force moved to strike both college grade point average and previous flying experience—two elements that accurately predict how well a student will perform—from its flight school candidate screening process in order to increase the diversity of the force. With a historically low 0.3% washout rate for performance in flight school, those two pre-screening elements were the last real quality control measures not just for candidates applying to be pilots, but in the entire pilot production process.

In still another example of the pursuit of equity and inclusion over readiness, in 2021 the Biden administration amended existing policy to allow unrestricted service by transgender personnel without regard to whether they suffer from gender dysphoria, a condition that can, as medical evidence has conclusively demonstrated, leave individuals with a higher risk of mental injury and disability.

Transgender individuals suffering from gender dysphoria have been found to suffer severe anxiety and attempt suicide at rates nine times those of the general population. On a battlefield where stress and danger skyrocket, this change by the Biden administration not only hinders military readiness, but also puts personnel with gender dysphoria in greater danger.

The implementation of policy such as this, alongside other diversity- and equity-focused reforms within the Defense Department, has only served to erode public trust in the military over recent years.

Whether it be the changing standards for individuals infected with HIV, or those suffering from gender dysphoria, or the abandonment of the proposed Army fitness test, Americans should be concerned by the Biden administration and Defense Department’s recent string of decisions in the name of equity.

By placing diversity and equity above all in recruitment and inclusion efforts, the Defense Department and the Biden administration have only created the conditions for deteriorating combat readiness, potential increased personnel shortfalls, and growing mistrust between the military and those it serves.