Taiwan’s Free and Vibrant Economy Is a ‘Democratic Success Story’ 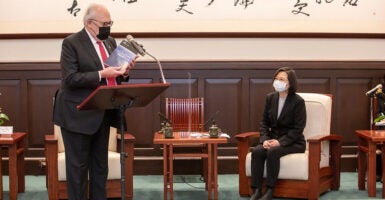 President Tsai Ing-wen of Taiwan meets with Edwin Feulner, founder and former president of The Heritage Foundation, on Feb. 15. (Photo: Office of the President, Republic of China (Taiwan))

Taiwan stands for freedom, transparency, accountability, and other democratic characteristics that clearly differentiate the island nation from China.

Taiwan’s commitment to cultivating a free economy and a vibrant civil society through independent democratic institutions has unambiguously made the country a notable example for Asia and the world in terms of how an emerging country can move progressively into new chapters of development.

The index assesses the economies of 184 countries based on 12 indicators of economic freedom—from property rights to financial freedom. These indicators are grouped into four categories: rule of law, limited government, regulatory efficiency, and market openness.

With its overall score improving by 1.5 points to 80.1, Taiwan achieved the status of the economically “free” category in the index for the first time.

As the 2022 index notes, Taiwan is one of the few countries in the world to have experienced continuous economic growth during the past five years. Economic freedom has increased significantly during that period as well.

Also notable is that Taiwan recently ranked as the eighth most vibrant democracy in the world, according to the Economist Intelligence Unit’s latest Democracy Index, which is based on five key metrics: electoral process and pluralism, functioning of government, political participation, political culture, and civil liberties. In 2020, Taiwan, along with Japan and South Korea, moved up a category from “flawed democracies” to “full democracies.”

Indeed, Taiwan’s proven track record of being a free, vibrant member of free market democracy is not only remarkable, but also should be further enhanced through pragmatic, strategic partnerships with the United States and other like-minded, willing countries around the world.

Taiwan’s economic and political transformations are far more than domestic successes. They have fundamentally altered Taipei’s relationship with Beijing, with Washington, and with the world. Unambiguously, Taiwan’s embrace of a free market democracy shows a better path for all the Chinese people

Taiwan has demonstrated to the world that freedom is a stabilizing force, that free enterprise, free association, and free speech lead to entrepreneurship, prosperity, and security. That is precisely why Taiwan matters to the world more than ever. As former Secretary of State Mike Pompeo underscored, Taiwan is “a democratic success story, a reliable partner, and a force for good in the world.”

Indeed, history reminds us that allies and partners are critical to winning any global fight, particularly when members of the free world are facing increasing challenges from authoritarianism. Nations sharing the values of freedom, a rock-solid commitment to preserving rules-based order, and a deep-seated desire to preserve and advance those democratic values are natural partners and allies.

According to Washington’s latest Indo-Pacific Strategy document, “China’s coercion and aggression spans the globe, but it is most acute in the Indo-Pacific.” To achieve a more free and open region, the document points out that the U.S. will build coalitions by deepening treaty alliances and strengthening relationships with leading partners such as Taiwan, New Zealand, and Singapore.

The strategy paper further notes that it is in the interest of America “to ensure an environment in which Taiwan’s future is determined peacefully in accordance with the wishes and best interests of Taiwan’s people.”

In last year’s December referendum, the Taiwanese people clearly expressed their determination to engage with the international community, showing that Taiwan is willing to accept international standards and tackle difficult trade issues.

Washington should take note of that. Clearly, starting the process of a U.S.-Taiwan free trade agreement is one worth investing further in over the next decade as well.

Such a practical, more institutionalized economic partnership would reinforce other vital diplomatic links between Taiwan and the United States as true partners in the Indo-Pacific region and beyond.