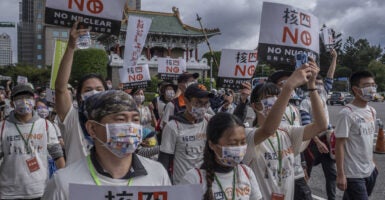 The people of Taiwan will vote on four referendum questions on Dec. 18 which will greatly impact the future of the country. Pictured: Demonstrator march to the Presidential Office in Taiwan ahead of the referendum. (Photo: Lam Yik Fei/Getty Images)

The  Biden administration’s recent virtual Summit for Democracy may have been more of a photo op than a genuine attempt to show leadership. But by including Taiwan, it did highlight how much Taiwan matters to the international community.

Taiwan has been unambiguous in its commitment to being a truly “responsible global stakeholder.” And despite Beijing’s converted efforts to isolate it, across a range of issues, from women’s empowerment to public health, it has succeeded remarkably well. Taiwan clearly provides a positive example of a pathway to development and prosperity based on high degrees of both political and economic freedom.

From a broader foreign policy perspective, the ongoing COVID-19 pandemic has shown why the United States should be in the long-term business of preserving and advancing freedom, civil society, and other core democratic values in practical partnerships with like-minded and willing allies, such as Taiwan.

Taiwan has successfully demonstrated its capacity to “flatten the curve” of the coronavirus while avoiding the kind of massive economic shutdowns experienced throughout the United States and Europe.

Now, as one of the best functioning, most dynamic free market democracies in the world, Taiwan will hold a national referendum on Saturday, Dec. 18 to decide the following four important issues. The results will go a long way toward shaping the model it presents the world.

Should the Government Reimpose Curbs on US Pork Imports?

This referendum item is about whether the government should ban the import of American pork containing ractopamine, an additive that enhances leanness, which is widely used in the United States. In August last year, Taiwan’s government lifted a ban on the import of U.S. pork containing ractopamine, removing a long-standing major stumbling block to a possible free trade agreement with Washington.

Should the Government Construct a New Liquefied Natural Gas Terminal?

Taiwan’s government wants to build a third LNG terminal in a northern area of the country to help secure stable energy supplies. But some groups oppose the plan on the grounds that it would devastate an algal reef. The referendum question asks whether the government should move the terminal away from the reef.

Should the Government Reactivate the Use of Nuclear Power?

Taiwan will vote on whether the government should restart construction of a decommissioned fourth nuclear power plant on Taiwan’s northeastern coast and put it into operation. President Tsai Ing-wen’s administration has said that it is committed to phasing out nuclear power in favor of greener alternatives like LNG and renewables. However, several blackouts have raised concerns about reliable electricity supply on the island.

Should Referendums Be Held on the Same Day as Major Elections?

The result of this decision could have major impact on turnout to such votes.

Why These Questions Matter

The first three of these four referendums will have significant impact on free trade. In particular, the outcome of the referendum on U.S. pork importation is likely to have broad implications on Taiwan’s image and the future of U.S.-Taiwan relations. It is essentially a decision on whether Taiwan supports free trade and scientifically determined safety standards—or protectionism.

It is quite regrettable that Washington has not decisively acted on Tsai’s decision to address lifting the ban on U.S. pork. But a decision to reimpose the ban will effectively close the door on the U.S., returning the favor in full.

It has become quite clear that Taiwan has become one of the principal partners of the U.S. in addressing an array of global challenges and seizing opportunities. In a 2018 speech to the American Chamber of Commerce in Taipei, then Deputy Assistant Secretary of State Alex Wong underscored America’s enduring partnership with Taiwan:

That spirit echoes loud and clearly more than ever, and it should continue to be so. The referendum this weekend will make it easier or harder for the U.S. to make the most of it. We can only hope Taiwan will choose science and free trade.