Why US-Taiwan Free Trade Agreement in Interest of Both Nations 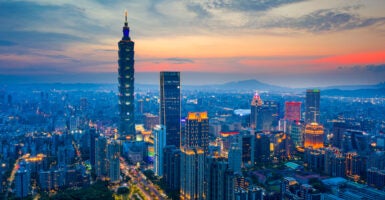 With a free trade agreement, America and Taiwan can and should go beyond the Trade and Investment Framework Agreement, which was signed in 1994. Pictured: The skyline of Taipei, the capital of Taiwan. (Photo: Kittikorn Nimitpara/ Moment/Getty Images)

Consider a recent letter to envoy Bi-khim Hsiao, the top official representing Taiwan in the U.S., in which Democratic Sens. Gary Peters and Debbie Stabenow of Michigan and Sherrod Brown of Ohio called on Taiwan for more support concerning the ongoing automobile computer-chip shortage. The shortage has resulted in American car manufacturers’ production pause despite increased demands for cars.

The three senators point out in their joint letter, “We value your efforts to address the shortage and are hopeful you will continue to work with your government [Taiwan] and foundries to do everything possible to mitigate the risk confronting our state economies.”

The senators further noted that “these plants are absolutely critical to our state economies, employing tens of thousands of our constituents and supporting a critical supply base that amplifies their significance by as much as tenfold.”

The appeal underscores exactly why the U.S. needs a bilateral free trade agreement with its like-minded and willing Indo-Pacific partner.

The Biden administration’s Interim National Security Strategic Guidance emphasizes that the United States “will support Taiwan, a leading democracy and a critical economic and security partner, in line with long-standing American commitments.”

Over the past few decades, The Heritage Foundation has called for greater economic interaction and broader dialogue between the U.S. and Taiwan through a bilateral trade and investment pact, which is the logical next step for elevating dynamic economic interaction between the two countries. (The Daily Signal is the news outlet of The Heritage Foundation.)

It’s encouraging that the U.S. and Taiwan resumed the long-delayed Trade and Investment Framework Agreement Council meeting by holding an 11th consultation in June. The two countries “welcomed the resumption of high-level trade engagement and expressed a desire to work closely together … on ways to deepen the U.S.-Taiwan trade and investment relationship.”

Yet America and Taiwan can and should go beyond the Trade and Investment Framework Agreement, which was signed in 1994.

Taiwan is quite willing to upgrade the nearly three-decade-old Trade and Investment Framework Agreement with an advanced free trade agreement that can practically reflect today’s rapidly evolving global supply chain.

Taiwan’s chief trade negotiator, John Deng, directly raised the issue of a free trade deal during the Trade and Investment Framework Agreement meeting in June, pointing out that firmly institutionalizing the freedom to trade and invest between the two longtime partners would also be “a strong show of U.S. support in the face of relentless Chinese pressure against the island.”

To that end, members of Congress have repeatedly called on the Biden administration to pursue a free trade agreement with Taiwan as well.

In August 2020, in a move designed to demonstrate good faith, Taiwanese President Tsai Ing-wen unilaterally addressed American complaints over market access for beef and pork imports, which long had been viewed as an impediment to starting free trade negotiations with the U.S.

It’s in the interest of America to follow through on Taiwan’s desire to enter into negotiations for a free trade and investment agreement. The U.S.-Taiwan relationship is one worth investing in further over the next decade. The practical, more institutionalized economic partnership represented by a free trade agreement would reinforce other vital diplomatic links between the two longtime partners.

It’s notable that the three Democratic senators acknowledged Taiwan’s “active engagement” in addressing the chip shortages while stressing that the issue is “so consequential to the vitality of our states.”

The senators added, “As policy leaders, we share a keen understanding of the challenge your country is facing and appreciate the steps you are taking to protect both the human and economic health of your country.”

Particularly in the context of the current coronavirus pandemic, defending and advancing trade freedom is more critical than ever.

Starting free trade agreement talks with Taiwan is a concrete step toward that.