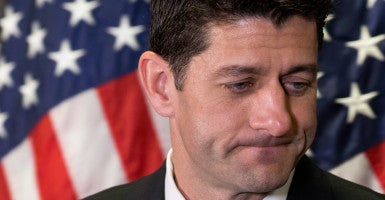 An LGBT measure derailed a $37.5 billion House energy and water spending bill and now threatens to bring the entire appropriations process to a grinding halt in the House.

The amendment from Rep. Sean Patrick Maloney, D-N.Y., would codify a 2014 executive order prohibiting federal contractors from discrimination on the basis of sexual orientation and gender identity.

Opponents characterize the Maloney amendment as a violation of conscience rights. They fear that the failed amendment could require federal contractors to provide special status to members of the LGBT community or lose their business with the federal government.

With the support of 43 Republicans, the amendment passed late Wednesday night, 223-195. But Thursday morning, the underlying spending bill was defeated 112-305.

There wasn’t a broad base of support for the energy and water bill among Republicans. For fiscal hawks, the topline spending levels made the bill unpopular. And for social conservatives, the LGBT amendment made the bill untenable.

More than half of Republicans, 130, and all but six Democrats voted against the bill.

Rep. Jim Jordan, R-Ohio, chairman of the Freedom Caucus, told The Daily Signal he opposed the energy and water package for both reasons.

“A bill that is supposed to fund infrastructure projects becomes a vehicle for attacking religious liberty, and leaders elected to protect taxpayer dollars continue to bust budgets and increase spending like there’s no tomorrow,” Jordan said in a statement. “I can’t support it.”

It’s likely that this episode will be replayed again and again on each spending bill. An aide from Maloney’s office told The Daily Signal on Wednesday that the representative “will continue the fight on other appropriations bills.”

Senior staffers in support and opposition of the LGBT amendment predict similar results.

Republicans weren’t alone in their opposition to the energy and water bill Thursday.

President Barack Obama warned that he would veto the legislation because it underfunds certain green initiatives. Even with the Maloney amendment, Democrats chose to rally to the White House rather than sign onto a Republican spending bill.

While Minority Leader Nancy Pelosi, R-Calif., supported the Maloney amendment, she voted against the underlying bill.

“House Republicans should be ashamed of themselves,” Pelosi said in a statement Wednesday, saying that their “vile crusade against LGBT Americans is a complete disgrace.”

A number of conservative groups opposed the Maloney amendment, including Heritage Action for America, the lobbying arm of The Heritage Foundation. The group key voted against the measure Wednesday, warning that it would codify “President Obama’s radical transgender bathroom guidance.”

The legislation would have funded the Department of Energy and other water programs inside the federal government. The bill’s failure underscores the difficulty of funding the government through a process known as regular order.

The House has only managed to pass one of a dozen appropriations bills needed to fund individual agencies and programs. Aides warn that the current gridlock increases the likelihood of a one-and-done spending package, known inside Washington as an omnibus.