Killing of Taliban Leader in Pakistan Demonstrates Shift in US Strategy 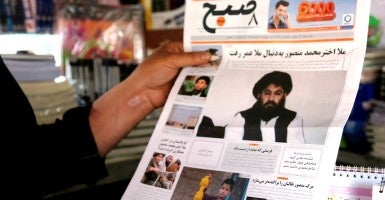 An Afghan man reads the news of Taliban leader's death on a local newspaper in Kabul, Afghanistan. (Photo: Rahmat Alizadah)

The strike is a bold move by the U.S. that represents a long overdue shift in strategy toward the Taliban.

The strike is a bold move by the U.S. that represents a long overdue shift in strategy toward the Taliban.

Over the last year the U.S. has focused its diplomatic attention on pursuing peace talks with the Taliban. Hopes were raised last summer when Pakistan played host to face-to-face talks between the Afghan government and Taliban officials in early July.

However, weeks later just before a second round of talks was scheduled to be held, reports surfaced that Taliban Supreme leader Mullah Omar had died two years previously, causing disarray within the Taliban movement.

Pakistan helped install Akhtar Mansour as Mullah Omar’s successor, although Mansour initially had trouble consolidating his control over the group. Pakistan also helped engineer the placement of Sirajuddin Haqqani as Mansour’s deputy, thus cementing ties between the Taliban and the deadly Haqqani network, responsible for some of the fiercest attacks against Afghan and coalition forces.

Over the last eighteen months, Afghan President Ashraf Ghani has gone out of his way to try to reach out to Pakistan to encourage it to use its influence to bring the Taliban to the peace table.

However, escalating Taliban violence in the country, which culminated in a major truck bombing that killed nearly 65 people in Kabul on April 19th, prompted Ghani to shift his strategy.

Ghani told a joint session of the Afghan parliament on April 25th that pursuing peace through negotiations with the Taliban was no longer a priority, and that Afghan security forces would destroy the “terrorists” through relentless air and ground operations.

The killing of Akhtar Mansour on Pakistani territory shows the U.S. also is making welcome changes to its Afghan strategy. It is unlikely the U.S. coordinated the drone strike with Pakistani officials, given Pakistan’s close links with Mansour. Pakistan has not yet officially responded to the strike, which almost certainly came as a major surprise.

The U.S. has sought to take advantage of possible openings for a Taliban reconciliation process but the wildcard has always been whether Pakistan would be willing to pressure Taliban leaders that shelter on its territory.

Without Pakistani willingness to crack down on Taliban elements on its side of the border, there is little reason to believe a reconciliation process is possible.

Only when the Taliban are under military pressure in both Afghanistan and Pakistan will there be any realistic hope for a peace settlement.

U.S.-Pakistan relations have recently soured over U.S. Congressional moves to block U.S. funding for additional F-16 aircraft for Pakistan and to enforce conditions on other U.S. military aid because of Pakistan’s failure to crack down on the Haqqani network.

The killing of the Taliban Supremo on Pakistani territory is likely to deepen those tensions.