Why John Kerry Should Apologize to France 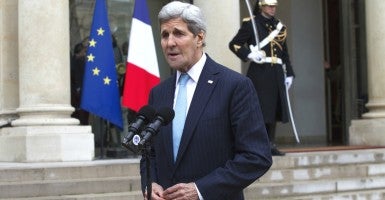 Unfortunately Kerry then proceeded to undermine his message with comments to the media that showed monumental diplomatic incompetence.

Talking about the January terrorist attack in Paris on the satirical French magazine Charlie Hebdo, Kerry suggested that there was a “rationale” for that assault (unlike Friday’s attacks in Paris).

“There’s something different about what happened from Charlie Hebdo, and I think everybody would feel that,” Kerry said in Paris, according to a transcript of his remarks. “There was a sort of particularized focus and perhaps even a legitimacy in terms of — not a legitimacy, but a rationale that you could attach yourself to somehow and say, OK, they’re really angry because of this and that.”

To talk about “legitimacy” or “rationale” for a cowardly attack of terror on working journalists, whose only weapons were their pens and their wits, is to call into question the rights of a free press, or free speech itself.

It’s true that Charlie Hebdo does not pull any of its punches with its cartoons – often taking aim at religious figures including the Prophet Mohammed – but that does not mean there is any “rationale” to explain the heartless attack against the publication.

While 40 world leaders, including David Cameron, Angela Merkel, Vladimir Putin, and Benjamin Netanyahu, gathered in Paris on Jan. 12 to march with millions of French after the Charlie Hebdo attacks, the one glaring absence was President Obama.

Nor could Kerry make it, and although Attorney General Eric Holder was in Paris, he didn’t attend either.

The following week, however, Kerry sheepishly showed up in Paris, bringing with him none other the singer James Taylor. Taylor serenaded the French with “You Have a Friend in Me,” which must have sounded singularly unconvincing to French ears – since actions speak louder than a James Taylor song.

The fact is that U.S. intelligence services and police are working with the French, the British and other Europeans to contain the threat of militant Islam to our homelands. Yet, the president of the United States and his secretary of state, by their ingrained political correctness and fear of appearing anti-Muslim in any way shape or form, have potentially undermined old and important U.S. alliances – in this case with France.

An apology from Kerry, at the very least, would be in order at this time.