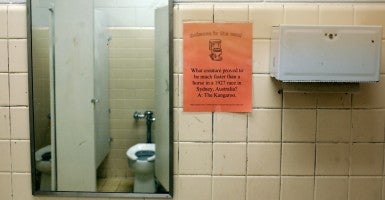 "The consequences of this social experiment would be disastrous," three Utah school board members wrote in response to President Barack Obama's transgender guidelines. (Photo: Kendrick Brinson/ZUMAPRESS/Newscom)

Instead of following transgender student guidelines pushed by the Obama administration, some Utah district school board members have plans to create a budget that would be free from federal funding, according to reports.

“The consequences of this social experiment would be disastrous. Not only as an invasion of the rights of a majority, but also with the potential legal liability this could incur upon school districts and the state, if we were to adopt this egregious guidance,” the three school board members in Utah County wrote, according to The Salt Lake Tribune.

Last Friday, the U.S. Justice and Education Departments released joint guidelines, stating that under Title IX provisions schools cannot discriminate based on sex, including the gender identity of a student. Title IX of the Education Amendment of 1972 prohibits sex-based discrimination in any educational program receiving federal financial funding.

“The guidance makes clear that both federal agencies treat a student’s gender identity as the student’s sex for purposes of enforcing Title IX,” the school guidelines put forth by the two agencies say.

According to MRC-TV, the three Alpine School Board members wrote that the school board will vote next month on a new budget, writing about the transgender student guidelines:

The Department of Education has threatened that it may pull education funding from our State if we don’t comply. This is likely a baseless threat meant to force states into compliance. However, with only 8 percent of State funds coming from the federal government, this would be an ideal opportunity to declare Utah’s sovereignty, and to allow our children to be free from the tyrannical mandates of our federal government.

This level of federal overreach is as unprecedented as it is unconstitutional.  As locally elected board members, we will be voting for a budget next month that includes no federal funding at all. While we realize we will have to tighten our belts and reallocate funds to accommodate those necessary programs, the safety and privacy of the students we were elected to serve outweighs the 6 percent that our district receives in federal funds.

Board President John Burton said at a school board meeting Tuesday evening that the school district does not plan to reject federal funding in the next budget and that the board would not be addressing the letter of the three board members, the Daily Herald reported.

Utah Gov. Gary Herbert, a Republican, issued a statement calling the transgender student guidelines “one of the most egregious examples of federal overreach I have ever witnessed.”

“Schools are the domain of state and local government, not our nation’s president,” Herbert said. “Unfortunately, this is exactly what I have come to expect from the Obama administration. If we have to fight this order, we will not hesitate to do so.”