Judiciary Chairman: Obama Received More Confirmations Than Bush at This Point in His Presidency 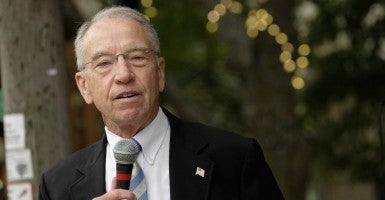 Sen. Chuck Grassley, R-Iowa, is pushing back against the idea that the judicial nomination process is broken after being criticized for not holding a hearing to confirm President Barack Obama’s Supreme Court nominee.

The Senate Judiciary Committee, tasked with checking the president’s power to appoint federal judges, has held hearings for 38 of Obama’s judicial nominations and has confirmed 324 of his judicial nominees during this session of Congress, a committee progress report released Wednesday says. The report claims this number is higher than President George W. Bush’s 303 confirmed judicial appointees at this point in his two terms in office. Grassley, the Senate Judiciary chairman, has taken flack from Democrats for not holding a hearing to confirm Merrick Garland, Obama’s nominee to replace late Supreme Court Justice Antonin Scalia. Grassley has said the Supreme Court vacancy should not be filled during a presidential election year.

I think Washington needs more farmers from Iowa, like Senator Grassley, looking out for other farmers, small business owners, or jobs to protect our rights and stop government overreach and of course follow the law and Constitution. If a Garland appointment were to go through, it would ensure a liberal majority for the next generation. I for one certainly appreciate [Grassley’s] strong leadership.

The New York Times reported this week that Democrats intend to make Grassley the “poster boy” for the stalled confirmation of Garland.

Speaking at the University of Chicago April 7, Obama stated, “If you start getting into a situation where the process of appointing judges is so broken, so partisan, that an eminently qualified jurist cannot even get a hearing, then we are going to see the kind of sharp partisan polarization that has come to characterize our electoral politics seeping into our judicial system.”

By the end of May, the judiciary committee aims to have held 43 hearings for Obama’s judicial nominees. This number is “equal to the number of nominees who received hearings from a Democrat-led Judiciary Committee at the same point in President George W. Bush’s presidency,” according to the progress report.

Other Iowans voiced their opinions during the Judicial Crisis Network conference call, “I thank Senator Grassley for standing up for his values that most Iowans share,” Kathy Pearson, owner of Kaas Employment Services in Cedar Rapids, Iowa, said in support of Grassley’s stance.

“There’s no need to rush to fill this present vacancy,” Richard Rogers, board member of the Iowa Firearms Coalition, said.

Rogers said that it will be appropriate for the next president to nominate a new justice to the Supreme Court.

A Judiciary Committee spokesperson said in a statement this week:

The continued attacks against Sen. Grassley’s record on nominations as chairman of the Senate Judiciary Committee are unfounded and based on political rhetoric from paid political operatives and an increasingly desperate minority. The truth is that by the end of this month, the Judiciary Committee will have held hearings for the exact same number of judicial nominations during this Congress, 43, as Sen. Leahy had by the end of May during the 110th Congress (2007 and 2008). For that matter, compare the 324 judicial confirmations of President Obama’s to the 303 judicial confirmations of President Bush’s at this same point.

“To say that President Obama hasn’t been treated fairly during his presidency isn’t based in reality,” the spokesman continued.

After Obama nominated Garland, Grassley said, “The American people shouldn’t be denied a voice” in the appointment of a new Supreme Court justice.