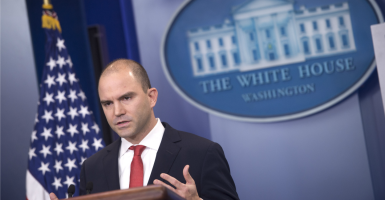 Now that the Obama administration is spiraling down to a sputtering end, the misguided architects of its disastrous Middle East policies are clamoring to defend what they see as Obama’s positive legacy in the Iran nuclear deal.

The latest case in point is the disturbing article published last week in The New York Times Magazine about President Barack Obama’s deputy national security adviser, Ben Rhodes, the callow “aspiring novelist” who hooked up with Obama’s presidential campaign as a speechwriter, and now has risen to become “the single most influential voice shaping American foreign policy aside from POTUS himself.”

Rhodes, the “Boy Wonder of the Obama White House,” was a graduate student pursuing a degree in creative writing before coming to Washington. David Samuels, who interviewed Rhodes for the article, noted: “His lack of conventional real-world experience of the kind that normally precedes responsibility for the fate of nations—like military or diplomatic service, or even a master’s degree in international relations, rather than creative writing—is still startling.”

It may be startling, but Rhodes’ weak foreign policy background and surprising influence over a president with whom he reportedly performed a “mind meld,” explains a lot about the Obama administration’s incoherent and ineffectual policies in the Middle East, where the White House has botched the struggle against Islamist terrorism.

Rhodes has been a key player in shaping the administration’s false narratives about al-Qaeda being on the run, close to strategic defeat; minimizing the security risks of the total U.S. pullout from Iraq; and downplaying the threat posed by the Islamic State, which Obama famously dismissed as a “JV team.”

Rhodes also has played a leading role in selling the Iran nuclear deal by arguing that the deal strengthens “moderates” in Tehran.

Samuels outlined how Rhodes helped to concoct the narrative that the administration began its negotiations in 2013 to take advantage of a more “moderate” Iranian leader, Hassan Rouhani, who was elected president that year. But Samuels noted that the negotiations actually had begun many months before Rouhani’s election and that the narrative “was largely manufactured for the purpose of selling the deal.”

He also could have added that Iran actually had started negotiating with the International Atomic Energy Agency on resolving the nuclear issue back in 2003 and later negotiated with the European Union, but walked away from several tentative agreements.

Even more misleading is the administration’s argument that the agreement can bolster Iranian “moderates” in a power struggle with hardliners. The real struggle in Tehran is between hardliners and ultra-hardliners.

Rouhani’s faction is more pragmatic than the ultra-hardliners, but it is by no means “moderate.” Rouhani is the tactful leader of the Iranian state, but Ayatollah Ali Khamenei, Iran’s supreme leader, remains the implacable spearhead of Iran’s Islamist revolution. The two have worked closely for years and continue to collaborate as a “good cop/bad cop” tag team.

The real moderates were purged in 2009 after they sided with millions of Iranians protesting the rigged elections that handed President Mahmoud Ahmadinejad a second term.

The search for Iranian moderates to deal with has been the “Holy Grail” for American presidents. The Carter and Reagan administrations also thought they had deals with one faction, only to see the deals sabotaged by a rival faction.

The Obama administration’s deal with Iran is unlikely to last much longer than those failed diplomatic engagements or the nuclear deal that the Clinton administration negotiated with North Korea.

Once that becomes clear, the smug and cynical efforts to sell the flawed nuclear deal will fail to secure a positive legacy for Rhodes, let alone Obama.