DC Gets Another Chance to Embrace School Choice 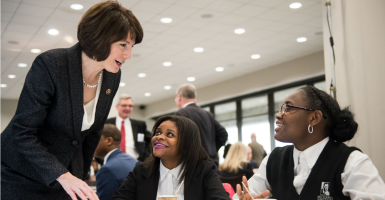 The House of Representatives will consider the Scholarships for Opportunity and Results Reauthorization Act (SOAR Reauthorization Act) on Friday, which would reauthorize the D.C. Opportunity Scholarship Program (OSP). The OSP has allowed thousands of low-income and minority students in Washington, D.C., to thrive at schools of choice in the district, despite the Obama administration’s multiple attempts to phase out the funding program.

Currently, the OSP will only be authorized through the fall. Former Speaker of the House John Boehner made the voucher program’s reauthorization his top priority before he left Congress last October, and now the proposal has been taken up by Rep. Jason Chaffetz, R-Utah.

The Obama administration’s repeated attempts to end this successful school choice program ignores the mountains of evidence that students who participated in the OSP succeed academically. A study commissioned by the Department of Education found that participants saw a 21 percentage point increase in graduation rates. Additionally, parents reported higher satisfaction with their child’s school. Parents in Washington, D.C., overwhelmingly named school safety as their top concern. Once these parents were able to send their children to a private school using the scholarship, they reported very high satisfaction ratings for school safety.

The D.C. Opportunity Scholarship Program has created a much-needed lifeline for low-income families in Washington, D.C., whose children had been relegated to some of the poorest-performing schools in the country. Washington, D.C., has the highest per pupil revenue in the nation, at almost $30,000 on each student per year in the public education system. Yet, D.C. consistently underperforms academically. High school seniors graduate at a rate of just 62 percent—behind all 50 states.

The spend-more model has not been working for the children of Washington, D.C. By contrast, for a fraction of what D.C. public schools spend, $8,265 for children in grades K-8 and $12,385 for students in grades 9-12, the OSP empowers them to attend schools of choice that work for them. As Matthew Ladner, senior advisor of Policy and Research at the Foundation for Excellence in Education, writes:

In sum, D.C. low-income students who received scholarships have higher graduation rates, higher student achievement, increased parental views of safety, and increased parent satisfaction. Indeed, there was not one single negative finding over the entire course of the evaluation [commissioned by Congress]. For a program that spent a fraction of the per pupil amount spent in D.C. public schools, these results are cause for celebration.

The D.C. Opportunity Scholarship Program has extended the benefits of school choice to the families of Washington, D.C., and changed the lives of students in the nation’s capital. It’s a successful option that should be not only fostered, but expanded in the years to come.