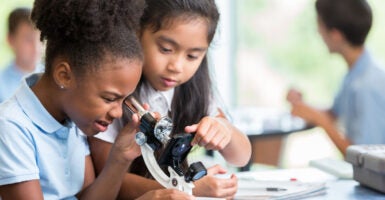 But America already spends a fortune on public schools.

My town, New York City, spends $28,000 per student—half-a-million dollars per classroom! Think about what you could do with that money: Hire five teachers? Pay for private tutors?

Where does the $28,000 go? No one really knows. When governments run things, money vanishes into bureaucracy. New York City spends $3 million per year on “executive superintendents” and $10 million on consultants.

Some charter schools offer better educations for less. But New York City politicians limit the number of charter schools. As a result, 48,000 kids wait on waitlists.

Fortunately, some charities have stepped in to help.

Jeniffer Gutierrez, a parent in the Bronx, was ecstatic to get Student Sponsor Partners’ acceptance letter. “I cried so hard when I received that letter because I knew it was an opportunity for my son. … High schools in the Bronx are violent. There’s no discipline. There’s no education.”

Her son Tyler didn’t feel safe in public school. “One of my best friends was shot and killed right next to me,” he recalls.

Many Catholic schools, even though they spend much less per student than government-run schools, do better. Student Sponsor Partners sent Tyler to Cardinal Hayes High School, where, says Gutierrez, teachers helped her son “excel in life.”

Tyler now attends St. John’s University on scholarship. He and thousands of other Student Sponsor Partners students are on a path to success.

That mentoring makes Student Sponsor Partners different. It assigns an adult to every student. Often these relationships continue after students graduate.

Jorge Aguilar says his mentor “planted seeds in my brain that I could do big things in life.” Aguilar then became the first person in his family to go to college. Now he’s a doctor.

“[Student Sponsor Partners] helped me break the chain of poverty,” he says.

Eighty-five percent of Student Sponsor Partners kids graduate high school, twice as many as their public school peers. Most are accepted by colleges.

All this happened because decades ago, philanthropist Peter Flanigan wanted to give parents an alternative to government schools. He hoped that would help at-risk teenagers escape poverty.

He started Student Sponsor Partners. One of the first kids he helped was Debra Vizzi.

“I had been homeless,” she tells me. “I left an abusive foster home and was sort of hopping around from shelter to shelter.”

She met Flanigan at a soup kitchen. He told her he’d pay for her to attend Cathedral High School.

“I was suspicious, especially as a kid on the street, but he was legit,” Vizzi laughs. “He paid $350 for me to go to one of the best high schools in New York City.”

Flanigan’s mentorship gave Vizzi more than a better education. “He helped me trust men, believe in people, helped me have a future. Even helped me become a mother later … something that I hadn’t had.”

“If you would have told me when I was 12 years old, I would run this organization, I would have said you were crazy.”

Want to help? Student Sponsor Partners seeks more people who will mentor a student and more donors who’ll help pay for it. You can get more information at sspnyc.org.