12 Amendments to Watch for in Defense Authorization Fight 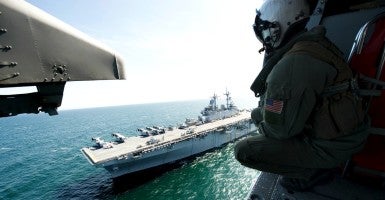 The National Defense Authorization Act, which will soon be marked up by the House Armed Services Committee, sets budgets and policies for almost every aspect of our national defense. (Photo: U.S. Navy photo by Mass Communication Specialist 1st Class Eric S. Garst/Released)

The House Armed Services Committee will soon mark up their version of the annual National Defense Authorization Act (NDAA). This bill regularly runs over a thousand pages long and sets budgets and policies for almost every aspect of our national defense. The committee markup routinely runs until 3 or 4 a.m. and includes hundreds of amendments and lots and lots of coffee (I know, I’ve worked for members of Congress in the last nine NDAA markups in the House). Here’s what to watch for in the markup.

The committee debates the NDAA by subcommittee jurisdiction. The markup will begin at 10 a.m. with opening statements and then starts with the less controversial subcommittees. Usually the subcommittees focused on equipment are relatively controversy-free so the markup will likely start with: Tactical Air and Land Forces, Seapower and Projection Forces, and Emerging Threats and Capabilities.

The more controversial amendment debates usually come in the next few subcommittees. The Military Personnel Subcommittee this year includes military health care reform, military justice reform and increases in the size of the Army and Marine Corps. The Readiness Subcommittee includes language prohibiting another round of base closures and amendments often deal with things like alternative energy and potentially endangered species. The Strategic Forces Subcommittee includes missile defense, nuclear weapons, and military operations in space, and invariably draws a wide array of amendments.

The last chunk of the markup deals with issues that fall under the jurisdiction of the full committee. This includes high profile issues like detainees at Guantanamo Bay, the fight against ISIS, and ongoing operations in Afghanistan as well as important but technical issues like acquisition reform and national strategy debates.

The biggest controversy may be the underlying budget proposal. The chairman of the House Committee on Armed Services, Rep. Mac Thornberry, R-Texas, has put forward a bill that only provides funding for operations in Afghanistan and Iraq through the first seven months of the fiscal year and uses the remaining money to support increases to the size and readiness of the military.

While the military absolutely needs a bigger budget, this maneuver is problematic and may produce significant debate.

In addition to the budget debate, there will be a wide range of policy debates. All 63 members of the committee can offer as many amendments as they want, as long as they are germane to the bill itself.

Here are 12 potential amendments to watch for:

2) Women in combat: The Department of Defense has opened all combat positions to women, but a number of potential issues could come up, including whether women should be eligible for the draft and whether the physical standards for certain positions are appropriate.

3) Sage Grouse: Last year’s NDAA introduced the issue of the Greater Sage Grouse (which is a bird) and whether the Sage Grouse should be considered an endangered species. Regardless of the merits of the issue, the Sage Grouse debate was one of the longest in the markup last year.

4) Afghanistan: Thornberry’s proposal includes funding to support 9,800 troops in Afghanistan after Jan. 1, instead of President Barack Obama’s proposal of 5,500.

6) Contract protests: Thornberry’s bill includes a requirement to study whether companies are protesting more often when they lose contracts, but more amendments on the topic are likely. Contract protests cost the government money and delay the delivery of goods and services to warfighters, but are intended to ensure fair contracting.

7) Missile defense: Republicans on the Strategic Forces Subcommittee have offered a number of provisions aimed at expanding America’s ballistic missile defenses, but some Democrats have indicated that they may fight these provisions.

8) Nuclear modernization: The underlying bill supports a robust effort to modernize the U.S. nuclear arsenal, but Democrats on the committee may try to oppose this effort.

9) Base closure: The underlying bill prohibits another Base Realignment and Closure (BRAC) round, but Rep. Adam Smith, D-Wash., ranking member on the House Committee on Armed Services, has tried to allow BRACs in the past and is likely to do so again.

10) Buy America: Some members have added protectionist provisions in the past and may do so again. While protectionist policies sound good, research shows that they don’t actually help the U.S. economy.

11) Non-defense research: Congress regularly adds funding for non-defense research efforts like cancer research or green energy. While these may be worthwhile issues to research, they should not be funded out of the defense budget.

12) Abortion: Occasionally members have tried to expand abortion access on military bases, but this is unlikely given the number of pro-life members in Congress.