Why Gender Dysphoria Must Remain a Bar to Military Service 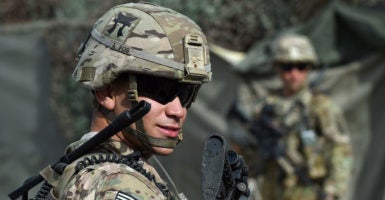 By law, the military can accept only “qualified, effective and able-bodied individuals.” That means people who are expected to need more than routine medical care or treatment are not qualified to join. Pictured: A U.S. army soldier stands guard at an Afghan National Army base in 2015. (Photo: Wakil Kohsar/AFP/Getty Images)

In normal usage, “discrimination” is an ugly word.

But discrimination has two meanings. The first and more familiar definition is “the treatment of a person or particular group of people differently, in a way that is worse than the way people are usually treated.” Discrimination of that sort is clearly unacceptable.

The second, less common usage is the “the ability to judge the quality of something, based on its difference from other, similar things.”

Earlier this month, several members of Congress introduced a bill to allow transgender individuals to serve in the military. Sen. Kirsten Gillibrand, D-N.Y., one of the bill’s sponsors, said in introducing the bill, “President Trump’s ban on transgender service members is discrimination. It undermines our military readiness, and it is an insult to the brave and patriotic transgender Americans who choose to serve in our military.”

What members of Congress like the sponsors of this bill—and indeed, the American public—often seem not to grasp is that discrimination—the less common meaning of the word—takes place every day at military recruiting stations across America.

That’s neither unjust, nor prejudicial. And contrary to Gillibrand, who aspires to be our next commander in chief, it’s necessary to ensure the readiness of the military and protect at-risk individuals.

Some examples are in order. Have asthma? You’re probably ineligible to join the military. A depressive disorder? Sorry, no. Torn rotator cuff in your shoulder? Nope. Come back perhaps when it heals or is repaired.

It’s the difference between an individual who is able to serve, and those for whom service presents a risk—either of not being able to complete military service or of doing so without incurring harm to themselves. In a strict sense, that’s discrimination.

By law, the military can accept only “qualified, effective and able-bodied individuals.” That means people who are expected to need more than routine medical care or treatment are not qualified to join.

Without this lawful ability to “discriminate,” we would place our military in jeopardy of not being able to protect the nation.

That brings us to the issue of service by transgender individuals. Anyone who wants to serve their nation is worthy of our nation’s thanks, because not enough do. A mere desire to serve, however, does not equal qualification.

What is often described as “Trump’s transgender ban” is anything but. Underreported is the fact that the policy that the Pentagon wishes to put in place—but that has been thus far been stayed by the court system—is far more permissive and evidence-based than the policy that existed for decades prior to June 2016, when President Barack Obama’s defense secretary, Ashton Carter, abruptly unveiled a new policy.

It’s necessary to get a bit technical here. An individual who is transgender is a person whose gender identity does not correspond to that person’s biological sex. Transgender individuals who suffer from gender dysphoria often “experience significant distress and/or problems functioning associated with this conflict between the way they feel and think of themselves (referred to as experienced or expressed gender) and their physical or assigned gender.”

Unlike the previous policy, the new rules allow individuals who are transgender but not experiencing gender dysphoria to join and serve in the military.

Military service is inherently stressful. It takes service members and puts them in unfamiliar, lonely, austere, and often hostile areas. Stress, anxiety, and suicide are already existential military problems. Indeed, the suicide rate for active-duty military members has been slowly rising over the past couple of decades.

It would, therefore, be reckless and ill-advised to allow individuals demonstrably at a higher risk of suicide and anxiety to join the military and be subject to the increased stresses of military duty—both for the readiness of their units and for the safety of the individual.

Critics, in raising objections, ask why then can’t transgender individuals with gender dysphoria be allowed to serve far from the front lines, perhaps in a desk or office job? Surely, they say, that wouldn’t be stressful.

But the military doesn’t work that way.

In order for the military to be effective, to borrow an analogy, every player must be able to get on the field and play their position. If there were a job divorced from stress, it would be reasonable to ask why we would need a uniformed service member to fill it at all.

Still others ask how such a tiny fraction of the military force that would be transgender, if allowed, could constitute a risk to a force the size of the U.S. military.

That ignores the fact that the U.S. military often goes to war one squad, one plane, one ship at a time. Often, the performance of a single individual can mean the difference between mission success and failure.

Finally, those opposed to the restrictions point to examples of transgender individuals who have successfully served in the military, including those who have been decorated for bravery.

Kudos to these individuals for serving, and serving well. But the military must set entrance criteria based on broad evidence, as opposed to isolated examples. The evidence overwhelmingly suggests that individuals experiencing gender dysphoria, if allowed to enlist, would present unacceptable risks to both a prospective military unit and to themselves.

Thus far, the courts have seen fit to substitute their judgment on military enlistment criteria in place of that of the commander in chief. That’s unfortunate.

What would be even more unfortunate is if a decision were made to permit individuals with gender dysphoria to serve in the military, and in so doing, took a reckless gamble with both the readiness of the U.S. military and the safety of those patriotic individuals.