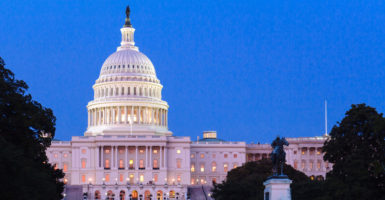 The House-passed continuing resolution would fund the Department of Defense at a level in line with the National Defense Authorization Act. (Photo: iStock Photos)

The continuing resolution recently passed by the House of Representatives includes a full fiscal year of appropriations for the Department of Defense.

That’s good news for anyone that cares about our nation’s defense.

Assuming the Senate passes the bill, it will be the fifth continuing resolution for fiscal year 2018, which began on Oct. 1.

Continuing resolutions are a funding mechanism designed to fill the gap between the time yearly appropriations end and when Congress is able to craft a new budget for the fiscal year.

If lawmakers want to avoid those negative impacts, they need to make special provisions in the legislation called “anomalies,” which provide exceptions to ongoing funding rules that allow the military to start up new programs or modify existing ones.

This is why this fifth continuing resolution, as proposed, would be a substantial departure from this year’s norm.

The language contained in the House-passed continuing resolution would fund the Department of Defense at a level commensurate with the plans laid out by Congress in the National Defense Authorization Act—a little above $659 billion for fiscal year 2018, which includes war funding.

This would be a considerable increase over President Donald Trump’s budget request and would be aligned with the well-considered plans first outlined by Sen. John McCain, R-Ariz., chairman of the Senate Armed Services Committee, in his proposal to rebuild the nation’s defenses.

Since the 2018 budget discussions started, there has been broad bipartisan agreement on the need to increase the defense budget as well as to increase end strength and investments in modernization. The National Defense Authorization Act, which includes those aspects, passed both the House and the Senate with strong bipartisan support.

The disagreement came when lawmakers attempted to address domestic spending priorities. This has led Rep. Mac Thornberry, R-Texas, chairman of the House Armed Services Committee, to state that the military is being held hostage to unrelated political issues.

Now, in its fifth continuing resolution, Congress has wisely separated defense spending from the broader discussion, demonstrating its willingness to stop holding our military and our defense hostage to political whims.

We as a nation can continue to debate important domestic issues that shape our society without the threat of a government shutdown hanging over our collective heads. Congress can act on the elements it already agrees on while leaving more contentious issues to a day when the debate won’t cost our military its readiness.

The Senate should embrace the House-passed continuing resolution, which demonstrates the substantial bipartisan consensus that exists around the defense budget and the need to rebuild our military. Doing so would be a positive step forward that would show our commitment to rebuilding our military.