The Castros Are Getting Everything They Want From Obama 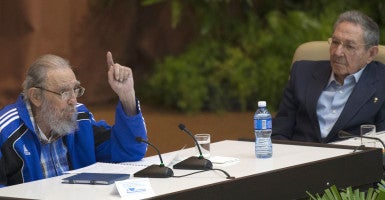 The White House decision to disinvite a Grammy-award winning jazz legend who is a strong defender of democracy in Cuba was nothing short of contemptible.

The fact that it has now embarrassingly backtracked and re-invited him proves it had acted like corporations that are only too happy to ignore human rights violations in exchange for future profits with Cuba until public pressure gets too intense.

In other words, engagement with the Castros is not changing them, as promised, it’s changing us—as many of us predicted. It bears repeating it: The Castros, like all dictators, are bacterial. You touch them and you become contaminated. We are diminishing ourselves, and for what? The Castros have rendered Cuba a pauperized state, with no money.

Paquito d’Rivera is National Endowment for the Arts Jazz Master; holds honorary doctorates from the Berklee School of Music and University of Pennsylvania; is a Living Jazz Legend of the Kennedy Center and has won the Presidential Medal of the Arts. He’s already had the honor of playing at the White House, which belongs to all of us.

In other words, not a piker.

Months ago, he was invited to play at the White House on April 30 for International Jazz Day, in an event to be hosted by President Barack Obama and first lady Michelle Obama. There would be other greats at the concert, including Sting, Chick Corea, Aretha Franklin, Diana Krall, Pat Metheny and Chucho Valdes. He felt honored, cleared his schedule, and prepared.

Then, earlier this month, d’Rivera received a call from the organizers telling him that he “had not passed the vetting process by the White House.” The invitation had been withdrawn.

But suddenly this morning, Thursday, April 21, Telemundo is reporting that the White House has called d’Rivera and said it had all been an error, the invitation is back on.

D’Rivera did not take things lying down but penned a public letter to Obama that bears reading because of its clarity and its defense of American values. The letter was dated April 11, but the White House did nothing until it began to get attention yesterday, Wednesday, April 20.

As d’Rivera put it, “I fear that this ‘not passing the vetting process’ may have to do with my decades-long vocal position against the dictatorship that oppresses Cuba, my country of birth, and my support of human rights and democratic values that you defended so well a few weeks ago in Havana.”

This last point is important, because it puts a lie to the Obama administration’s contention that shunning the Castros had not worked, but its new policy of engaging the Western Hemisphere’s worst human rights offenders and only dictatorship would somehow magically produce results.

That it has. Just this week Carnival Cruise suddenly embarrassingly had to backtrack from its just announced launch of a cruise to Cuba that would comply with Castro regulations by excluding Cuban-born Americans. As happened to the White House, the “Hate Boat” proved a public relations nightmare.

Google, too, has cozied up to the Castros by teaming up with Fidel’s favorite artist in a gallery where 20 Cubans (out of a population of 11 million) are promised free and fast Internet access. Only that “Google+Kcho” is 100 percent monitored, so not even those 20 can read stuff the regime frowns upon. It’s turned into “Google+Fidel’s Best Friend.”

The administration itself has already compromised democratic values because of Obama’s new “Man in Havana.” Secretary of State John Kerry shunned pro-democracy figures—not their tormentors, as principle should have dictated—at the ceremony opening our embassy in Havana last year. The State Department, too, meted out rough treatment to the daughter of a murdered Cuban dissident because Castro government goons had complained about her presence at a press conference.

In response for our abasement Raúl Castro and the communist gerontocracy he leads have extended a collective middle finger, laughed at us and called Obama—our president—the equivalent of the “N Word.”

At the just concluded bi-decennial communist party congress the entire leadership was pretty much “re-elected” by the 1,000 cadre in attendance. Raúl himself received 100 percent of the vote (popular chap he is) and will now remain head of the party, and thus head of Cuba, till 2021, when he will be 90 years old, if he lives that long.

Note to teachers, throw away the Howard Zinn material and tell your students to read this:

A few months ago, the prestigious Thelonious Monk Institute informed me that they had proposed that I participate in International Jazz Day, an event organized by UNESCO that will take place at the White House on April 30th, and will have you, Mr. President, and first lady Michelle Obama, as hosts. This concert will feature many loved and admired colleagues of mine such as Chick Corea, Aretha Franklin, Jimmy Heath, Dave Holland, Al Jarreau, Diana Krall, Christian McBride, John McLaughlin, Pat Metheny, Wayne Shorter, Esperanza Spalding, Sting, and even my former Cuba-based colleague Chucho Valdés. I was delighted and put the rehearsal schedule and dates on my calendar.

I regarded this invitation as recognition of my contribution to American culture that, throughout the years, has earned me the appointment as NEA Jazz Master, honorary doctorates from Berklee School of Music and University of Pennsylvania, Kennedy Center Living Jazz Legend, and the Presidential Medal of the Arts, among other awards. So imagine my surprise when, a couple of days ago, I received a phone call from the Monk Institute informing me, without any further details, that my participation did not pass the vetting process by the White House. That is all the information that was given.

If the matter at heart here were my cultural contribution to Jazz and American culture, I wouldn’t take the time to write you this letter, Mr. President. I have played the White House before. However, I fear that this “not passing the vetting process” may have to do with my decades-long vocal position against the dictatorship that oppresses Cuba, my country of birth, and my support of human rights and democratic values that you defended so well a few weeks ago in Havana. This wouldn’t be the first time that I have suffered discrimination instigated by the Cuban dictatorship, due to my democratic convictions, even in the United States. And still, this occasion strikes me as particularly troublesome, given that it is an event in which you, Mr. President, will be the host. You, who just a few days ago defended in my native-land the principle that “citizens should be free to speak their mind without fear, to organize and to criticize their government and to protest peacefully,” and praised the accomplishments of the Cuban exile, of which I am a proud member.

Mr. President, I write to you because it concerns me that your genuine goodwill gestures towards the Cuban people could be understood as a call to be complacent towards the demands of the dictatorship that oppresses it; that these gestures may be taken as a pretext to marginalize, even on American soil, Cuban exiles who defend the right of the Cuban people to express freely and to decide their destiny democratically. It is telling (and I pray that I’m wrong) that if the Cuban regime is willing to exert this level of spite and pressure against a public figure in another country—and not just any other country, but the United States—one can only imagine the level of impunity with which the Castro regime acts against Cuban private citizens at home.

It concerns me, that if this is an act of political discrimination against me, it will take place in your house—which is the house of all Americans, given its symbolic weight. It concerns me because it is easier to bear individual discrimination against my person—no matter how painful and humiliating it may be—than the idea that in the name of coexistence with other governments, regardless of their repressive nature, there will be a violation of the basic principles of free speech that so many generations of Americans have fought for over centuries — principles that are a model and a beacon of hope for a considerable part of humankind.

I suppose that this decision to “veto” my presence was made without your knowledge, but my exclusion from the show will be made public. It is my civic duty as a citizen to warn you that even an event celebrating a musical genre that embodies the aspiration of freedom could be used precisely to do the opposite. Because of my respect towards you — which has only increased recently due to your performance in my native country—I believe it is my duty to inform you that your status as host is possibly being manipulated by the very people who deny the very principles that allowed you to become the president of this country, and which allow me to address the most powerful man on Earth with absolute freedom and without fearing repercussions.