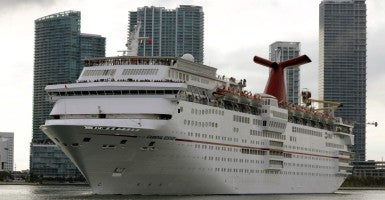 Carnival Cruises is kind of a pioneer in Cuba, though not in the way it intended. Right now it is Exhibit A of the perils of getting in bed with blood-soaked dictators. Chamber of Commerce, take heed.

On Monday, Carnival finally appeared to have noticed that it was in the middle of a PR fiasco with its “Hate Boat” to Havana cruises that did not permit Cuban-born Americans aboard. After a weekend of withering criticism, the company announced that it will “delay” the trips if the Castro regime refuses to change its policies banning such people from arriving by sea.

Carnival’s position until today has been that it was merely following a Castro rule that bars people born in Cuba from arriving on the island of their birth by sea (dictatorships have such whimsical rules). Even Secretary of State John Kerry, a champion of President Obama’s engagement of the communist dictatorship, thought Carnival was on shaky ground.

“They should not embrace a policy that is Cuban, which winds up discriminating against Americans,” Kerry said last week.

So this morning Carnival rushed out a press release which appeared to backtrack from the earlier policy. It announced that Carnival,

“[I]s accepting bookings on its 10th and newest brand, Fathom, from all travelers to Cuba, regardless of their country of origin, and is looking forward to its historic inaugural voyage to Cuba on May 1, 2016. While optimistic that Cuba will treat travelers with Fathom the same as air charters today, should that decision by Cuba be delayed past May 1, Carnival Corporation will delay the start of its voyages to Cuba accordingly.”

Not exactly a Shermanesque statement that Carnival will refuse to travel to Cuba unless it is allowed to book all Americans, but a sign that the heat was getting to the Anglo-American company based in Doral, Fla. (a Miami suburb). Not only were there demonstrations against the company, but it was also sued in a Miami Federal Court.

Carnival, however, did not make clear why it says it “remains optimistic” that it will convince the Castro regime to change its rules, given that Raul Castro, just as his brother Fidel before him, is always reluctant to be seen to make concessions to exiles it derides as the “Miami Mafia.”

Nor did Carnival say how it would deal with the fact that the ports of call on its cruise contain properties that the Castros confiscated from Americans. The Port of Santiago in particular, where the cruise would put in, contains a certified U.S. Treasury claim which the U.S. government has the obligation to resolve.

In other words, Carnival has stepped into the legal and moral abyss that will suck in all companies dealing with the Castro regime. It is a government that mistreats and jails its own people, and which will force nearly all companies into the blood-stained hands of Raul Castro’s son-in-law, General Luis Alberto Rodriguez Lopez-Calleja, the man in charge of the Cuban economy.

Bloomberg laid out what’s at stake very well in this story with the telling headline, “Want to Do Business in Cuba? Prepare to Partner With the General.”

One of America’s best companies, Google, has, too, compromised itself. After President Obama suddenly announced during his trip to Havana last month that “Google has a deal to start setting up more Wi-Fi access and broadband access on the island,” the Mountain View, CA giant began to set up a studio with a Cuban artist, “Kcho”, that it said would allow Cubans to have high-speed Internet.

In fact, Cubans have to wait in line for hours to get into the gallery, which is only big enough for 20 people in a country of 11 million Internet-starved citizens. “Kcho,” real name Alexis Leyva, is a regime-supporter well-known on the island as “Fidel Castro’s favorite artist” who delights in telling interviewers, “I am proud that Fidel calls me his brother” and who enjoins artists to strengthen socialism.

Google’s new “man in Havana” was reported this month as telling young women waiting in line to enter the gallery, called Google+Kcho, “we are monitoring all the sites you enter because I want to know what you’re using the connection for.”

Why is the company that once had “Don’t Be Evil” as its motto debasing itself this way? The best explanation was offered today by Mike Elgan for Computerworld:

“No, Google isn’t laying fiber, launching balloons or installing equipment all over Cuba. It’s not planning to sprinkle fast, free, magic Google Wi-Fi all over the island.

“The best Google can do for now is make friends and influence people.

“Cuba won’t join the rest of the world in ubiquitous Internet access until the Cuban government either becomes less repressive, or falls out of power. When that happens, Google, as the dominant and best-connected tech brand, will be ready.”

Until that happens, American companies can expect more embarrassments. Cheerleaders of such engagement like the chamber should know what it is in store for its members.