Puerto Rico’s Liberal Mismanagement Should Not Be Rewarded by Congress 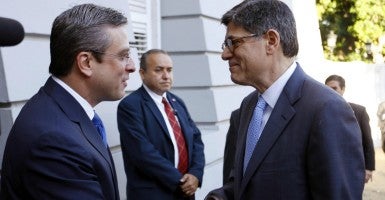 Puerto Rico is facing a financial mess. Much of it has been caused by poor governance on the island, but also exacerbated by the heavy hand of the United States government.

No one said it better than Pedro Perluisi, the Democratic Delegate from Puerto Rico to the U.S. House of Representatives, when he spoke at a hearing on the Puerto Rico bankruptcy bill. He said, “Part of this over-spending is definitely the result of mismanagement. I admit it. It’s embarrassing.”

But then he went on to blame Obamacare not spending enough money on Medicaid. Prior to Obamacare, he said that Puerto Rico received $350 million per year. After Obamacare, they are receiving $1.2 billion per year, but conditions are worse. And he seems to think it is because the federal government needs to spend more money.

This mentality has been plaguing states and municipalities for decades, including cities like Detroit and states like Illinois, New York and California. These states would like nothing more than to be absolved of the bad decisions and false promises they have been making. The Puerto Rico Oversight, Management, and Economic Stability Act (PROMESA) provides a template for how these states can escape the moment of truth.

The governor of Arizona recognized this, writing to Congressional leadership:

“Significantly, the proposed policy measures create a moral hazard for states and territories. It disincentivizes states from guarding against the risks and consequences of profligate spending.”

This governor is exactly right. Bailouts, bankruptcy, and mandatory debt restructuring make it harder to stop spending, because why should you when someone else will be responsible for cleaning up the mess?

The fact is we have a glimpse at the future of the United States if we cannot take a hard look at our own spending and make difficult choices.

The fact is we have a glimpse at the future of the United States if we cannot take a hard look at our own spending and make difficult choices. Mandatory and entitlement spending is now two-thirds of our budget. In ten years, it will be nearly four-fifths. If we don’t change course soon, the bond markets will teach us the same hard lesson.

Earlier this week, I was asked to allow the Puerto Rico bankruptcy bill to pass the Committee on a voice vote. I strongly objected along with some other members. This is the kind of “go along” politics Americans and I are tired of.  Anytime we don’t have full transparency and a full amendment process, we have a bad outcome.

If a Puerto Rico bankruptcy bill comes before the committee as planned, I will insist on a recorded vote and I will do my best to defeat it.