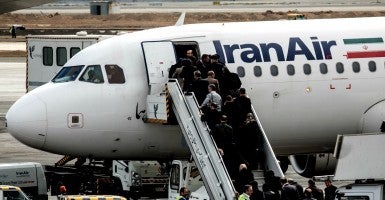 Shelby and his allies are fully justified in constraining Ex-Im from doling out even more of its most harmful subsidies. (Photo: Michael Kappeler/dpa/picture-alliance/Newscom)

Officials of the Obama administration teamed up with Boeing executives last week to lobby for Senate confirmation of the president’s nominee to the board of the Export-Import Bank, which lacks a quorum and thus is barred from approving deals in excess of $10 million (that is, the deals that most benefit the multinational conglomerates that are least in need of taxpayer subsidies). Lest anyone doubt that the delay is anything but entirely justified, however, the following facts are in order:

Taken together, these facts (among others) underscore why Senate Banking Chairman Richard Shelby, R-Ala., would do very well to continue resisting the lamentations of Boeing and its Washington buddies who want to revive Ex-Im’s most egregious pursuits.

Last week’s statements from Boeing CEO Dennis Muilenburg, Treasury Secretary Jack Lew, and Ex-Im President Fred Hochberg coincided with the bank’s annual conference as well as news that a Boeing delegation recently met in Tehran with representatives of Iranian airlines. (General Electric, another primary beneficiary of Ex-Im, has likewise been “exploring business opportunities in Iran,” according to news reports.)

Notwithstanding the lack of a board quorum, bank officials have authorized about $1 billion in new financing this year—80 percent of which has benefited “small business” (according to Ex-Im’s expansive definition of the term). Boeing claims to be losing deals, but according to bank data, some $912 million in insured shipments, guaranteed credit, or loans authorized so far this year will benefit the company.

Muilenburg has specifically cited Ethiopian Airlines as unable to take delivery of Boeing jets without Ex-Im financing—without mentioning that the bank has already authorized multiple financing deals for the company in recent years. Meanwhile, Boeing is very cognizant of the fact that Airbus, its chief rival, is finalizing a sale of planes to Iran, and some European export credit agencies have expressed a willingness to finance deals for Iranian companies.

Boeing is well positioned to finance its own deals with the more than $12 billion in cash and marketable securities on hand. Or it could secure third-party financing for its customers. Indeed, Boeing’s commercial airplanes division reported record revenue of $66 billion in 2015 fueled by an industry-record 762 deliveries. But if executives regard a potential customer as too great a credit risk, they are free to forgo the deal—unlike taxpayers, who currently shoulder more than $102 billion in Ex-Im exposure.

There’s also no valid reason for General Electric, with a market cap of $288 billion, to be benefiting from Ex-Im subsidies. Yet more than $194 million in insured shipments, guaranteed credit, or loans authorized this year will benefit the multinational conglomerate. ExxonMobil, too, is a beneficiary despite a market cap of nearly $350 billion.

Poor judgement on the part of Ex-Im officials is also evident in the operational failures documented by the bank’s Office of Inspector General, including:

A strong export sector is vital to a healthy economy, and U.S. exports have reached record highs in recent years. But Ex-Im finances less than 2 percent of all U.S. exports. To the extent that exports declined in 2015, a weaker global economy and a stronger dollar are to blame.

Ex-Im subsidies instead carry considerable costs—for taxpayers and for the American businesses left to compete against foreign firms subsidized by the U.S. government. And should the bank somehow succeed in financing the sale of Boeing aircraft to Iran, U.S. security and that of the region would be weakened even more than it already has been by President Obama’s lifting of sanctions.

Given the vast resources of Ex–Im’s principal beneficiaries, and the abundant supply of private export financing, Shelby and his allies are fully justified in constraining Ex-Im from doling out even more of its most harmful subsidies—i.e., competitive advantages to foreign conglomerates on the backs of U.S. taxpayers.